IPL is as much about smart marketing blitzkrieg as it is about cricket. The IPL Season 6, which is drawing to a close, drew a tremendous response, thanks to some smart OOH ideas by SET MAX in collaboration with MOMS. 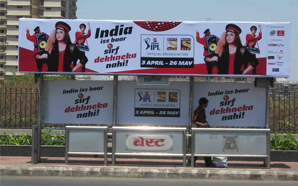 With the Indian Premier League Season entering its sixth year, SET MAX had to do something innovative and take the whole excitement surrounding the event to the next level. Thus was born the whole idea of giving a new dance twist to the series with the campaign urging people to not only watch cricket, but also groove to the signature tune'Jhumping Jhapak'.

Quite obviously, the theme line for IPL Season 6 was'Dance IPL' and the message designed for the viewers was'Sirf Dekhna Nai' (Don't just watch it). Of the whole 360 degree communication plan, the OOH medium played a pivotal role in spreading the craze. The OOH campaign was basically an extension of TVC and print which was then strategically designed to target the mass audience. OOH specialist agency MOMS handled the outdoor duties of the campaign.

IPL being what it is, conventional formats were just not enough to step up the buzz.  Innovations were introduced to make it successful and these involved dance choreography set to the signature tune. The whole dance steps were depicted on billboards in Mumbai, which was also an extension of the TVC. These were seen at Mahim Causeway and Juhu JBPD circle in Mumbai, two of the most prime and busiest locations in the city during peak hour. 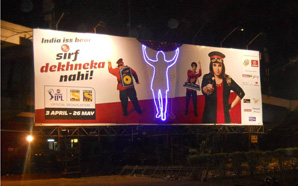 Another innovation in Mumbai was the hoarding on Juhu Beach with the communication "SIRF DEKHNA NAIâ€ wherein the creative conveyed the feel of an actual stadium put up on the hoarding. The'SIRF DEKHNA NAI' communication was also made viral supported by branding on Auto Rickshaws.  It was also taken to various suburban stations in Mumbai, and other key city railway stations such as Chennai, Bangalore and Hyderabad.

While MOMS has been handling the IPL account for the last several years; adding a new twist to the campaign was nevertheless a challenge. Says Dipankar Sanyal, COO, MOMS, "MOMS handles the IPL account for Set Max who has the sole telecast rights. IPL, over the years, has become an event all cricket lovers look forward to. Having said that, it has its own set of challenges for all parties involved. For us, the challenge is to make the campaign look fresh and interesting every time. We look into the core concept of the campaign and devise our strategy, plans and innovations around it. We look at how a core idea can be translated across various out- of-home formats. What we consciously try is not be repetitive in our ideas.â€

He further added talking about the whole IPL experience with SET MAX, "Ever since we have been associated with SET MAX and IPL it has been a very exciting journey. The success of the campaign that you have seen so far is a result of a fabulous partnership with our client who has been very supportive and open to new thoughts and ideas and have always pushed us to the limits. The campaign entailed meticulous micro level planning based on various attributes.â€

Well, all that meticulous planning seems to have paid off for the campaign has lifted up the whole medium as well.  Wonder what's in store for the next IPL Season and its OOH splash.