Home » Viewpoints » “We are miles ahead of competition”

“We are miles ahead of competition”

Ashish Bhasin, CEO APAC and Chairman India, Dentsu Aegis Network is extremely proud of the decade long journey of Posterscope India. He expects the specialist agency to double its annual business growth over the next 10 years while raising the benchmark standards for the industry. Edited excerpts of the interview 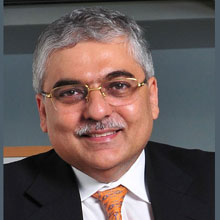 In the journey of 11 years, which are the milestones that Posterscope India has surpassed?

I think the biggest achievement of Posterscope has been that it became a hugely commercial success virtually from day 1. From its very first  year, Posterscope turned profitable within six months. I remember, in 2008 Haresh Nayak and six other colleagues came expressing their desire to work with me. I welcomed them but also sounded them out that we were a very small loss-making company so I couldn’t afford to lose money. We started this journey on August 25, 2008 and in the first year itself  we arrived at a break-even point and turned profitable. Today, Posterscope has more than 200 people.

The unique thing about Posterscope is that the agency has seen consistently high growth. It may be recalled that the agency was launched at the time of Lehman Brothers’ collapse and the ensuing global financial crisis.

In the past 11 years there hasn’t been a single year when the agency didn’t meet its target numbers. There are three key reasons behind this consistent growth. First, great leadership from Haresh and the team he has managed to build. Second, the agency has diversified its business very significantly, spotting new client opportunities and developed deep knowledge to conduct those businesses. For instance, we entered retail marketing through Hyperspace and then the ambient segment got launched, among others. Third, is the whole area of data and technology, tools and automation. Posterscope is the first, and perhaps the only agency, that has really bought science to the world of OOH, making the agency head and shoulders above the market.

What was Posterscope’s approach to engaging diverse advertising clients?

The biggest constraint to OOH’s growth had been the media owners’ approach to business that is perceived as unprofessional. Posterscope is trying its best to help the industry overcome this challenge by bringing science and data to the business, and thereby metrics for greater accountability. The second challenge is that there is no common currency for audience metrics. I think if the OOH business wants to be counted as an industry, it needs to start behaving like one. The professionalism needs to be brought in and investments in research are required. Several efforts and attempts have been made in the past at the industry level but they met with little success because of the short-term vision of the media owners, and the fragmented nature of media ownership across India.

On the agency side, over the last few years there has been some significant consolidation of business. Today, the top 5-6 specialist agencies control 80% of the organised OOH market but that is not the case when it comes to media ownership. Unless this media ownership consolidation doesn’t and big corporates don’t come into this business, the OOH industry will be left to deal with people who either don’t have the vision or the desire to professionalise their operations.

Posterscope has brought about a high level of professionalism, data and tools but until the industry as a whole is not professionalised no agency or client can significantly back the change.

Would you say that allotment of ad rights in an entire city exclusively to a single media operator would help?

That would be a step in the right direction, bringing about some standardisation of the business practices. However, the bigger solution lies in global majors like JCDecaux, Clear Channel and others establishing and scaling up their operations in the Indian markets. They have deeper knowledge of the business and deeper pockets and that will contribute to the standardization and corporatisation of the OOH business.

OOH may not figure prominently in most media plans. What has been Posterscope’s approach on this front?

Posterscope has been exceptional in media planning because besides the standard OOH campaign, they have brought in a huge element of innovations in the planning with the usage of planning tools. OOH is no longer just billboards or bus shelters, whereas today it is about being a location specialist. For instance, you have a consumer going into a mall and to create a last mile presence OOH is an important format -- it is a last mile contact with the consumer before he/she makes a purchase. I think Posterscope can be credited with turning expanding into a location specialist media, which is a big strength I believe.

On a larger plane, the DAN group has two top OOH agencies – Posterscope & Milestone Brandcom. We have made reasonably good efforts in bringing some level of order into this extremely chaotic industry. We have tried to professionalise by getting some of the best professionals, international learnings, research, tools and etc. on it. We are reaping the benefit of being a consistent market leader over the last five years and more in the industry. Having said that, no single agency or group can achieve the level that industry can achieve together. For instance, we have the most sophisticated research for our clients but still it will never be a common industry currency. Some other agencies may also have such tools but none of those will become industry measurement metrics until the industry gets together, accepts and agrees to a common currency. I think it is the big thing waiting to happen and we are trying to do our bit to drive the industry in that direction. However, there are vested interests that hamper this effort and so it is going to be a longer journey to get to that goal.

Do you see OOH building its competitiveness as DOOH networks expand?

DOOH is going to become bigger and with enough opportunities, it is going to become more real time. There are still constraints for the large format DOOH because of municipal restrictions and weather conditions. But when you have DOOH formats in a controlled environment like inside buildings and malls, it can perform pretty well. I think, we have already taken a lead in that with ROOH but I believe this is the area where a lot of growth and innovation will happen. For instance, today the technology is available where advertisements can be determined as per the floors in a mall. The more data rich insights, tools and real time advertising become available, the more relevant it will turn out to be for marketers, the more influencing it will be on customers and the more professional the business becomes. Posterscope is adopting the DOOH technology as much as possible.

Clients also need to hang on when it comes to accepting as it happened in other part of the world. For instance, China’s number one DOOH company became so huge that it got listed on NASDAQ. It is going to happen provided it is professional and the scale expands.

Posterscope is trying to organise this segments with the ROOH platform that will become more attractive as the number of screens available on the platform increases. As such, a national client may not interested in buying a small number of screens from different sources. The client is really interested in buying audiences, so to attract them there is a need for larger availability of audiences’ network.

My message to media owners is to stick to it because the rest of the world has shown that DOOH growth is explosive. Get on to Posterscope’s ROOH and that will eventually pay good dividends.

Technology will increasingly become a key differentiator in the OOH business. What are the significant tech-led initiatives taken by Posterscope?

The is an area that involves much time and investment unlike the conventional media that covers 1,200-1,500 big towns and thousands of advertising sites. Due to fragmentation, there is a huge number of vendors operating the conventional business.

It needs a huge commitment to invest in technology for OOH. If you invest in building data and technologies, the benefits will accrue two years later. In the first two years, the investments will go into different areas such as training of your people, getting tools and data. However, in today’s short time-oriented business environment, there is no conviction and courage to be able to do that. I believe Haresh has done very well on this front. Of course, we are a part of a network where globally we have some of the best learnings in OOH because Posterscope is the best OOH agency worldwide.

As a group in India, we are heavily focused on digital marketing and technology so there was a sort of an enabling culture which helped us to do this. However, it was hard work and investment without knowing the outcome and I am really glad we decided to do that because it is helping out in a big way now.

Where do you see Posterscope 10 years down the line?

I would hope that they grow even faster than this. We have brought ourselves into a situation where we are a significant market leader by a distance with both Posterscope and Milestone Brandcom. And, both Haresh and Nebendu have the responsibility to make sure that as a group the gap between the number 1 and 2 keeps getting wider by bringing in more innovative solutions.

I feel we are the rightful owners of the lion’s chunk of the entire OOH market because of the quality of people, tools and OOH products that we have; no other agency even comes close to us. We are miles ahead of competition but when you are in that position you have to work that much harder to stay ahead. So, my expectation from them would be that if they think it is good growth now, they have to achieve greater growth in the future.

'COMPASS & Beacon deployed together will be path-breaking’