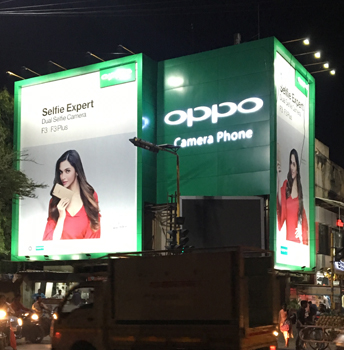 Non-metro markets are emerging as strong brand advertising destinations, as is evident in the OOH sphere. An EY report published earlier in the year had noted that a ‘new wave’ of non-metro cities is rapidly closing in on the eight metros in terms of consumption, media penetration and investment opportunities. These non-metros are “markets with the greatest gap between demand-side consumption and supply-side penetration,” said the report titled ‘India’s Growth Paradigm: How markets beyond metros have transformed’.

The report identified 42 ‘new wave’ markets including the two new metros—Jaipur and Surat—and 10 high-potential cities including Bhopal, Chandigarh and Patna besides 30 additional emerging markets that include Agra, Amritsar and Raipur. “Taken together, these 50 cities (eight metros and 42 new cities) represent the key urban markets for businesses, marketers and investors to target,” the report said.

In recent years, auto, FMCG, consumer durables, BFSI, telecom services, retail brands, among others, have taken the OOH route in a big way to penetrate the non-metro markets. The impressionable OPPO advertisement on display in Latur city in the state of Maharashtra is a case in point.

The advertising trends stem from brands like Samsung Electronics taking a firm resolve to ensure that its consumer durable portfolio reaches every district with its ‘attack’ strategy to increase market share in the non-metro markets. The company is targeting 80 districts pan India and is customising its flat televisions, refrigerators and washing machines, apart from enhancing its after-sales services to ensure greater penetration into the hinterland.

Non-metro markets are also seeing a spurt in tourism. In May 2017, Google revealed that travel queries emerging from non-metro cities were nearly 41 percent of the total volume which is a major shift from the previous year.

In a major shift in its domestic route network strategy, Jet Airways is seeking to provide direct connectivity between tier-II cities as it aims to penetrate deeper into such markets.

Likewise, increasing prices of houses in tier II cities like Kochi, Lucknow and Kanpur landed India into the top 10 appreciating residential markets in Q1 FY18, a report by Knight Frank said on Thursday. The country moved up 13 spaces to place at 9th position among 55 international markets.

All trends point to non-metro OOH markets taking a northbound journey for the long-haul.