TATA Docomo innovates on OOH to establish the product proposition as well as create differentiation in the market. 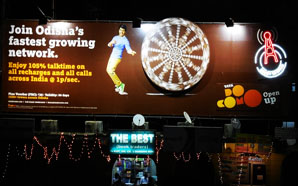 Tata Docomo has launched a clutter-breaking outdoor innovation in Orissa with the aim of leveraging their long association with the Orissa market and also communicate their network's strengths. The campaign also talks about network expansion in Orissa and some priced talk time products launched lately.  The innovation showcases a giant moving wheel cutout on a Large Format hoarding (50FT x 15ft).  The site is situated in Jaydev Vihar, Orissa, an up market area and one of the busy intersections of the state. Also, the location is on the main road connecting all major IT parks, corporate houses and residential apartments which helped the brand in targeting audiences from all walks of life. The campaign is planned for a duration of 3 months and is executed by MOMS outdoor agency.

The idea behind the innovation was to relate with the state. A giant wheel symbolizes the Sun temple of Orissa. Since the underlying message was to communicate the brand's network reach across the state, and availability of products in all 30 districts, they decided to use the wheel from sun temple as a main draw.

In order to build high impact and catch immediate attention on the giant wheel, small round glass particles were pasted over the wheel. When light fell over the wheel, it was reflected by the glass and created a magnificent effect. The wheel moves clock wise and there is also a tower symbolic to BTS radiation. This tower was made by LED lights along with the Tata Docomo Logo in multi color.

To make the innovation robust, the wheel was built in a manner that can sustain heavy wind pressure. The cut-out was made of sun board.  The diameter of the wheel is 12 ft. and 500+ small mirrors were fitted to get a reflection from the halogen light fitted on top of the hoarding. Also a gear box was fitted to lower down the RPM to 20 RPM to rotate the wheel at a stagnant speed.  The biggest struggle was wheel movement due to voltage fluctuation; however it was rectified by putting a voltage stabilizer.

Speaking about the innovation, Ashok Ghose, MBU Head East, Tata Teleservices Ltd,  said, "We believe in doing innovation as a differentiator to establish the product proposition in the market. This innovation is a smart execution to attract the attention of the consumers and at the same time communicate the network strength of Tata Docomo in the Orissa market."

The response has been overwhelming for the brand.  People have been taking pictures on their phone and posting them on social media.