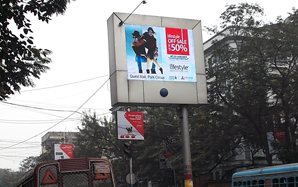 Lifestyle, the premium retail brand recently started an outdoor campaign in the "City of Joy' during their store launch as they forayed into the East zone, which was followed by a sale campaign. Executed by Selvel Advertising Pvt. Ltd. the campaign utilized all the major transit and touch points throughout the city to inform the customers about the brand's presence at the Quest Mall . The sites include locations such as Gariahat, Lindsay Street, No. 4 Bridge, Park Circus, Camac Street, South City, Theatre Road, Rowdon Street, Alipore Road and such.

Anirban Bose, General Manager-Selvel, Kolkata shares, "We are happy to be selected as the OOH partner to create the awareness of the launch. The strategy was to create and build an impactful visibility for the launch & EOSS. We executed the outdoor campaign in such a manner that no eyeball could miss the launch as or the EOSS campaign.â€

Vijay Kumar Singh, Dy. Manger- Sales, Selvel, shares, "The impact of the campaign was palpable through the footfalls the brand got in their store and out-of-home awareness was created for their brand.â€
Tags : Lifestyle Selvel Advertising Pvt. Ltd. Kolkata
Advertisement