Free dive into a creative campaign

Aamby Valley City's OOH campaign executed by Milestone Brandcom proves that the medium can also electrify and persuade the audience with its power of realistic depiction.

A new and innovative Aamby Valley City's OOH campaign executed by Milestone Brandcom proves that the medium can also electrify and persuade the audience with its power of realistic depiction. 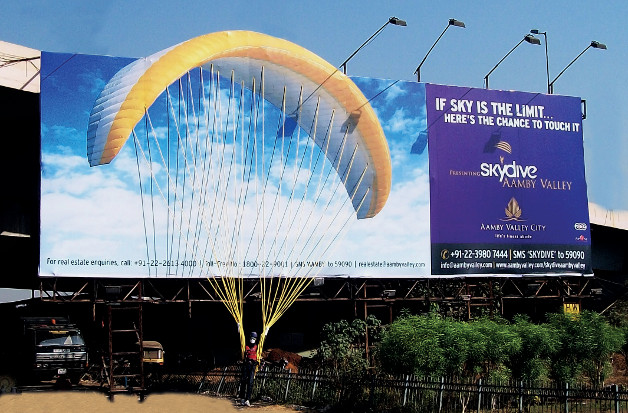 Aamby Valley City, an adventure hub situated in Maharashtra has launched a fun-filled sky diving event for nine-weeks. One of the highlights offered is the opportunity to sky dive with an internationally acclaimed Sky Diving crew from Spain. It offers adventure seekers without prior training an experience of a full skydive. To communicate all of this to the daring audience, the brand leveraged the OOH medium and spent 70-80% share of their advertising on it. The ideation and execution part of the campaign was handled by Milestone Brandcom, an OOH agency. 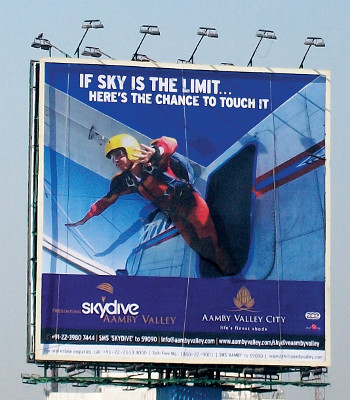 "The communication objective for the Out-of-home (OOH) campaign was to create hype and grab as many eyeballs as possible thereby luring the TG down to Aamby Valley to experience this exciting event. Milestone executed an assortment of innovations to distinguish the campaign amidst the clutter in the OOH space," shares Vivek Kumar, CEO Aamby Valley City and Hotel Sahara Star.

The campaign communication carried electrifying visuals of divers free falling with the tagline 'If sky is the limit, here's the chance to touch it'. Billboards & kiosks located on key stretches and junctions were converted into parachutes where one even witnessed skydivers landing & soaring on billboards with 3D like cutouts in motion. These were implemented across various media formats including billboards, gantries & kiosks at key locations within the city to connect with the TG and create additional hype around the experience.

"It was a great opportunity to work on such an exhilarating brief from Aamby Valley. Team Milestone worked and executed multiple innovative ideas on Out-of-home to give the adventure seeking audiences a glimpse into this spectacular event, with the scale and magnitude of OOH to best suit the proposition of going beyond the limit & touching the sky," said Nabendu Bhattacharyya, Founder & Managing Director, Milestone Brandcom talking about the campaign.

The result of such an innovative campaign was overwhelming. In the first 3-4 days, the response level from the consumers was very high and approximately 20 enquiries were made per day.
Tags : Aamby Valley Sahara
Advertisement