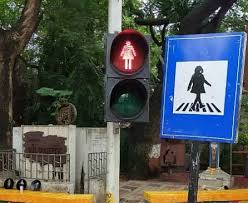 The move is a measure taken by BMC as a step towards gender equality by creating female representation in public spaces which are often male-dominated in India’s towns and cities.

The corporation intends to use both male and female figures for pedestrian depiction on traffic signals and signages across Mumbai. Hence, it has decided to change 240 pedestrian signages at 18 junctions. These traffic junctions, which extend from Siddhivinayak Temple to Mahim Police Station, will use a female figure.

Maharashtra Tourism and Environment Minister Aaditya Thackeray has tweeted “if you’ve passed by Dadar, you'd see something that will make you proud. BMC is ensuring gender equality with a simple idea- the signals now have women too".