To announce the BB Messenger launch on Android and iOS, Blackberry executed an engaging activity across high footfall areas to tap the youth audience.

Blackberry has expanded its portfolio by providing the Blackberry Messenger service to Android and iOS users. Thus to lure the non Blackberry users and promote its offer, the brand planned an experiential campaign. The'BBM 4 ALL' campaign was launched to drive adoption and provide consumers, primarily the youth, a unique BBM experience. Through this campaign, the brand reached out to almost 40 colleges across Mumbai, Bangalore and Delhi through activations. In addition, a partnership was struck with 500 CafÃ© Coffee Day across 13 cities and RJ integration was done in six cities for the duration of four weeks. 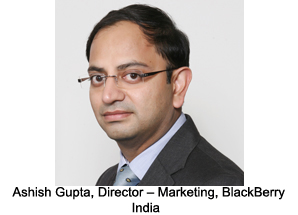 Commenting on it, Ashish Gupta, Director - Marketing, BlackBerry India said, "As a part of our marketing strategy, we want to drive a stronger relationship with our core target audience,'urban youth', in new, interesting and stimulating ways. The activation has been designed and executed on radio, digital media; CafÃ© Coffee Day and colleges which are the best mediums to establish connect within this segment and amplify our brand reach.â€

The high-end activity was organized by touching the youth audience through the usage of different mediums:

PIN Mania- Acasino style circuit based machine randomly chose a prize from a set of 4 options when a student downloaded BBM and entered his/her PIN. The winners were awarded with branded swags like sling bags, t-shirts, sippers and key-chains.

CafÃ© Coffee Day: A tent card was placed in the outlet inviting consumers to download BBM and SMS their PIN to 575758.The customer was then sent an SMS as a reply with a promo code that could be used to claim a free cappuccino at the CafÃ© Coffee Day outlet.

Radio: The campaign required RJ's to get listeners to play games, and send a BBM to the RJ to participate.  Other integrations included BBM etiquette, RJ se dostikaroge, etc. 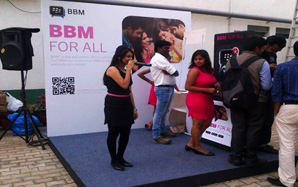 This is the second activation in a row organized by Blackberry. Talking about his strategy, Ashish said, "At BlackBerry, we believe in focused marketing approach. Our primary target group is the urban youth who love technology and are always on the move. Therefore OOH platforms offer us an opportunity to directly engage with them with immediate call to action, instead of merely putting the message across which may or may not elicit a response.â€

According to the brand, the response to the campaign has been greatly encouraging. Through the'Free BBM, Free Cappuccino', the brand had targeted to give away 50,000 cappuccinos in a span of one month. In fact, they gave away 9,500 cappuccinos in the initial week itself. Activations were conducted at 40 colleges; the'Pin Mania Machines' and'Pin2Win' games were conducted in colleges and witnessed large-scale participation of students. "Most importantly, marketing initiatives such as these have helped our brand to stay relevant and in sync with our audience,â€ summed up Ashish.