Bisleri Fonzo fizzes up with #MMMbhiAAHbhi

Executed by media planning and buying agency, Wavemaker, and with the creative handled by FCB Ulka, the month-long integrated marketing campaign is aimed at appealing to the youth with a healthy and refreshing choice for sultry summer 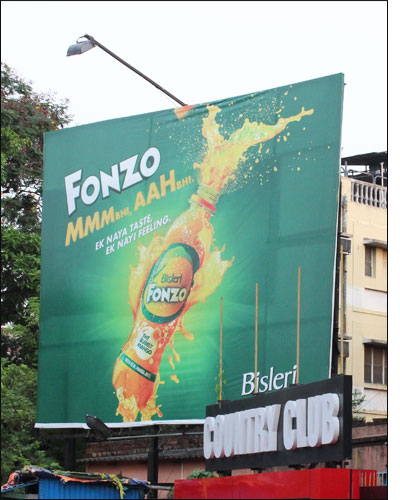 The 360-degree OOH campaign #MMMbhiAAHbhi conveys the sensorial experience of the delectable taste of the mango juice and the refreshment of the fizz to allure the youth who prefers healthy options like fruit-based drink. Targeted at 15-35 years old (SEC A and B) consumers, the campaign has been widely promoted at more than 350 sites using media formats like hoardings and bus queue shelters. The campaign has been covered in nine cities including the top metros like Mumbai, Bangalore, Chennai, Hyderabad, Goa, Delhi and NCR, Ludhiana and Kolkata.

The campaign has been executed innovatively using glow lights in the hoardings extensively. Being a nation-wide campaign it talks about refreshing fizz that contains real fruit juice. To make this campaign eye-catching and to illuminate in the dark, the Bisleri Fonzo bottle has been highlighted. The fizz gushing out from the bottle has been outlined to make the creative look more enticing and attractive.

Speaking about the launch, Anjana Ghosh, Director - Marketing and Business Development at Bisleri International said, “Bisleri Fonzo is a novel offering that aims at appealing the younger audience who are looking at a healthier alternative. Mango being the favourite fruit and flavour of most Indians, we see a growing market for the fizzy version of mango drink in India and we are confident that the launch campaign of Bisleri Fonzo, the #MMMbhiAAHbhi sensation will grab consumer interest and will entice them to try our new offering.”

Speaking on the campaign, spokesperson from FCB India said, “We were excited at the prospect of working with such a unique taste and category. Here at FCB India, the entire team was living in the Fonzo world and the signature tune was buzzing in the agency. Our approach was to focus on the taste of Fonzo and make it the next big drink, breaking all the typical norms of soft drink advertising.”