Home » Viewpoints » Bangalore is yet to catch up with digitised OOH formats: Ranadeb Paul

Bangalore is yet to catch up with digitised OOH formats: Ranadeb Paul

During his session, Ranadeb Paul, AVP & Business Head - South & East, and National Head- Activation, Kinetic Worldwide India, mentioned that Karnataka lags behind in terms of the new developments on the OOH landscape. 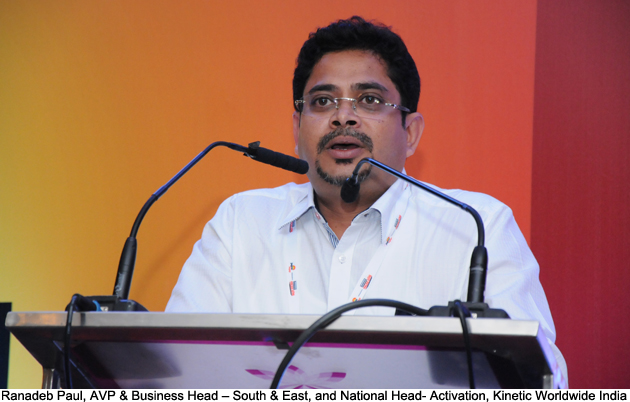 Speaking on the current trend of digitized OOH in the industry, Ranadeb Paul, AVP & Business Head - South & East, and National Head- Activation, Kinetic Worldwide India, mentioned that Karnataka lags behind in terms of the new developments on the OOH landscape. He added that mobile and social media integration are at the high point today.

During his address on the theme "Is Karnataka OOH industry up to speed with OOH business trends?â€ at the first Karnataka Talks OOH! conference held in Bangalore on October 9, 2014 Ranadeb shared that there are many international campaigns which are breaking grounds in the digital OOH space. For instance Dove campaigns use facial recognition technology, while a FIFA promotion created an ambience like a football ground. "Despite being a business and investment destination, Bangalore is not up to the mark when it comes to OOH. Except for a few JC Decaux airport campaigns, not much is happening on the digital front,â€ he adds.

The session highlighted certain steps which can be taken to move towards a digitized version for OOH. Ranadeb mentioned that there are issues with infrastructure and solving those problems at their roots will bring about upliftment. "PPP projects can be quite helpful. Digital billboards can be installed as a step ahead. Efficiency in metro projects, maintenance of OOH and hygiene around it can bring about massive changes. Also, introducing new formats will also help,â€ Ranadeb suggested.

He believes that one of the reasons for low-key digital OOH in Bangalore could be that industry leaders based out of Bangalore like Flipkart, Amazon, Nike etc. are not very active with outdoor advertising.