Recent studies have shown that every half an hour, one Indian farmer commits suicide. The campaign on Mumbai's key hoardings by The Times of India was meant to drive this fact in an impactful manner and urged people to visit the website savethefarmersfamily.com to make donations that would help stop more untimely deaths. 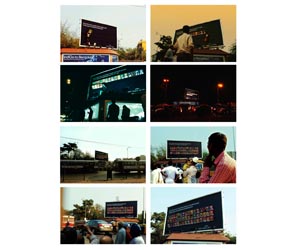 Over 60% of the population in India reportedly depend on farming to earn a livelihood directly or indirectly . With monsoon playing truant leading to a series of droughts, and with the lack of better prices, and the exploitation of the farmers by middlemen, more than 300,000 farmers in India have reportedly committed suicide till date. They have been plagued by crop failure, drought and debt. Recent studies have in fact shown that every half an hour, one Indian farmer commits suicide.

The Times of India, therefore took up the challenge to convey this rural problem to urban India through an innovative campaign. The idea stemmed from a disturbing fact - one farmer commits suicide every half an hour. While nothing could bring back the dead, the living surely deserved a chance, afterall, the families of the deceased, covering over a million starving women, children and elderly people, are left with no source of income. Thus, a promotional activity was carried out in select cities over a few days. The intention was to shock people out of their inertia and get them to donate.

The campaign has been executed by creative agency Taproot India for The Times of India in Association with Samaj Sevak Charitable trust and NABARD, while the outdoor innovation has been aptly implemented by Milestone Brandcom. The creative was  minimalistic on black background with the main theme message. Every half an-hour, from morning to night, framed and garlanded photographs of 48 recently deceased farmers were were put up on hoardings in the same frequency in which the farmers killed themselvesand. The billboards placed at high traffic junctions such as MahimCausway in Mumbai, ensured that thousands of people witnessed the activity daily. 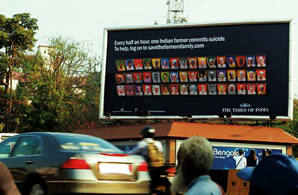 Santosh Padhi, Chief Creative Officer & Co-Founder- Taproot India shares, "The awareness campaign began with an exhibition last year followed by a Television commercial/internet film, social media. The money which got generated through the selling of the portraits were distributed among families of 12 deceased farmers who committed suicide. This time to communicate this information that every half an hour a farmer commits suicide and to generate more awareness and donation, we chose a street full of people, i.e. streets of Mumbai. The location was Mahim Causeway, which is a prime high-traffic location of the city. Photographs of the deceased farmers from various parts of the country were kept ready with garlands over it (when someone dies in India the photograph of the deceased is hung on a wall with a garland over the photograph). Right in the middle of a busy day, these photographs were put up on the hoardings in real time, one every half an hour, to signify the frequency with which farmers killed themselves.â€

"This is an issue that India has been battling with for decades. It was time to raise public awareness and concern on the matter. The initiative, partnered by Times of India, aimed to lead people to help out the grief stricken families through the website. Out-of-home was the medium of choice for the activity and ordinary billboards were also picked up at key locations around the city to spread the message. Milestone Brandcom helped in the execution of a powerful emotional and creatively aligned campaign around the issue. The objective was to shed light on the matter and strike an emotional chord amongst passers-by to help initiate relief efforts and build awareness. Execution was a challenge as every half an hour each frame with garland was installed in a frequency whereby audience got the opportunity to witness the activity live during the day and night and was touched,â€ shares Nabendu Bhattacharyya- Managing Director - Milestone Brandcom.

When asked about how the initiative is going to help the families of the farmers, Santosh adds, "The innovative outdoor caught the attention of passers-by in a big way. Many more people logged on to the website and a few donated as well. The money collected via the website and through online/ tv/offline merchandising is being used to help bereaved families and to teach the farming community alternative means of livelihood like setting up poultry, pottery, livestock rearing, tie-n-dye, brick making so that they can survive and do not opt for taking such short-cuts like suicides anymore.â€

The objective is to keep the awareness momentum alive and for that outdoor is one of the strongest mediums. The live hoarding campaign will soon move to other cities in Maharashtra like Nagpur and Pune after the General Election 2014.
Tags : Times of India Taproot Milestone
Advertisement