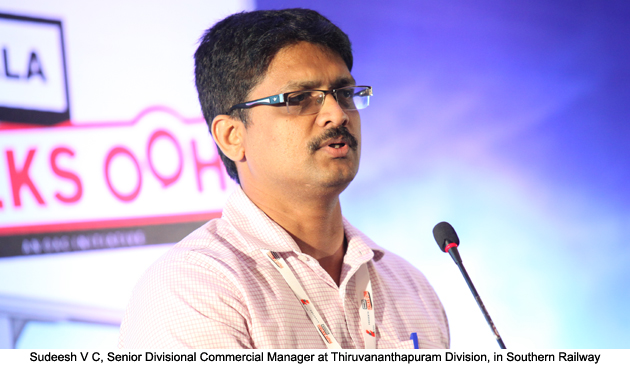 Presenting the topic 'In what ways can OOH enhance railways infrastructure, modernisation and commercial earnings growth?' at Kerala Talks OOH 2015, held recently at Kochi, Sudeesh V C, Senior Divisional Commercial Manager at Thiruvananthapuram Division, in Southern Railway commented that railway advertising is a very good option for advertisers and Indian railway is the best means to commute around the country as a majority of the population uses this mode of transport regularly.

Railway is the most popular mode of transport in India and it caters to all categories of people. "Brands can use this medium to build their image by using different types of railway advertising. Digital OOH is another option to advertise on railways. It is already implemented through railway information system with one third of the space dedicated to advertisements and rest with information. We are also planning to implement a voice based information system which could grasp the language of people and revert to them through the same language with a ten second advertisement slot,â€ Sudeesh said.

The advertisements inside the trains and at railway stations have longer exposure period. Passengers inside the trains spend hours in it and therefore are able to retain the brands by repeated viewing and reading. People waiting at railway stations also view and read the ads again and again. Thus, they also grasp the advertisements quickly. Concluding the session Sudeesh added, "Railway department could generate a fair revenue from advertisements, while it could create value, reach and impact to the brands or advertisers.â€