Nokia rings in a smart campaign for Lumia 920

In association with Lintas Initiative, Nokia cashed in on the outdoor medium to position its Lumia 920 cell phone as the'Most Innovative Smartphone.' 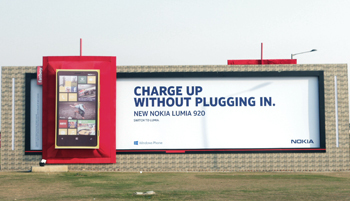 Nokia and their outdoor agency Lintas Initiative executed an OOH campaign for the Lumia 920 handset to endorse the product as the'Most Innovative Smartphone' and convince the audience to switch to Lumia. The campaign was designed to talk about the latest features of the cell phone i.e. wireless charging, preview HD camera and low light imaging. A month-long campaign was witnessed across the metro cities of Delhi, Mumbai and Bangalore, which targeted the age group of 25-45 years, besides the business class.
On hoardings the cell phone was given a 3D effect with a message saying'The Most Innovative Smartphone'. Also, an innovation was designed across airports wherein a life size cushion with 3D effect known as'Fatboy' along with a 3D cutout of the phone, was placed on the format to depict the wireless charging feature.
Viral Oza, Director Marketing, Nokia speaks, "The Fatboy is our latest offering in the accessories segment for our Lumia Windows Phone 8 smartphones. The focus of the OOH campaign is to play up the unique yet a quirky, colorful and fun charging experience. Picture a cute plush red pillow and now imagine charging your phone on it.â€ 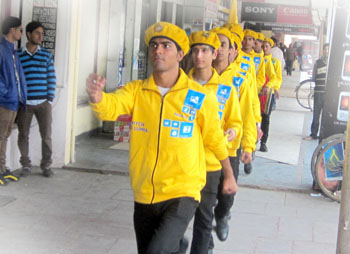 The campaign was also supported by unique brand activation for the retailers of Lumia 920 called Lumia Army. The 10 day-long activation was carried out by Pathfinders in regions such as Delhi - NCR, Chandigarh, Ludhiana and Jaipur. The activity also aimed at strengthening the relationship between the retailer and the brand. This included an army of 11 soldiers dressed in yellow (the flagship color of Lumia 920), who marched to the stores and asked the retailers to become the commanders of the Lumia army and lead Lumia 920 in the market. Further, the retailers were adorned like an army commander with an army hat, medals and a sash with "Commander of Nokia Lumia Armyâ€ written on it. In the end, the army saluted its new commander and marched out.
The advertisement was deployed on large format and impactful media at high traffic areas of the city. The brand allotted 20% of their budget to the outdoor medium in order to target the moving population.
Commenting on the campaign, Vivek Lakhwara, President, LIO said, "The unique concept brought to the mobile market by Nokia needed an exceptional demonstration to strike the right chord with audience. The OOH campaign developed for Lumia 920 attests the influence of outdoor medium as it is already creating waves and is sure to leave a long lasting imprint of the brand.â€
Tags : Nokia Lintas Initiative Vivek Lakhwara
Advertisement