In association with Vivaki Specialist Services, the brand used large sized media to create impact and imagery rather than going for reach and frequency. 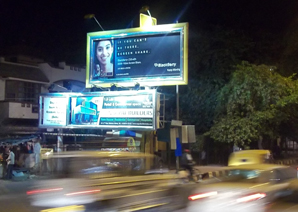 Blackberry, a global leader in wireless innovation, rolled out an extensive OOH campaign on the occasion of Z10 launch with an aim to promote its new operating system 10 platform. In association with Vivaki Specialists Agency, an OOH campaign was executed to create the buzz new handset and its features to make a prominent place in the cluttered market of smart phone. The campaign was made to look for city specific large sized media to create impact and imagery rather than going for reach and frequency. The campaign was seen top eight metro cities plus 26 top Tier II towns. The duration of the campaign was 27 days in metro cites and 25 days in Tier II towns. A total of 200 odd media were utilized in 34 markets for the OOH activity with major allocation for Top 8 metros.
"Blackberry Z10 was a lot about the new mobile computing platform. It is a smart phone which encapsulates the BBZ10 platform and the objective behind the whole campaign was to ensure a fairly comprehensive campaign. While we were present in mass media like TV, print etc. we used OOH fairly extensively for the campaign. The direction was to focus on having a higher impact and higher frequency for the right TG,â€ said Ashish Gupta, Director Channel Marketing, Blackberry.
According to the brand, 15% of the total budget was allotted to OOH medium. Blackberry planned to utilize this medium to accomplish two marketing objectives. "We used OOH fairly aggressively to extend our campaign. We phased out the whole 360 degree in sync with each other, primarily TV advertisement was rolled out which ran for 4-5 weeks. Then after third week of TVC, we ran the OOH campaign so there was an overlap of 2 weeks but we also got an extension of 2-3 weeks on outdoor.  It was both a reminder and actually a recall after the TV campaign,â€ explained Ashish. Another objective was to reach at the right target audience of BB. "OOH sites were chosen targeting locations where we found that Blackberry target audience would be available. Most of the media used were larger formats, Markey sites in different citiesâ€, added Ashish. Few unique features of the phone were showcased with the help of innovations. First was the Peak feature, a panel was highlighted to show the feature at Markey properties. Another innovation was done around the keyboard to showcase the flick feature and predictive text and that was shown in fairly innovative manner at some of the outdoor sites. 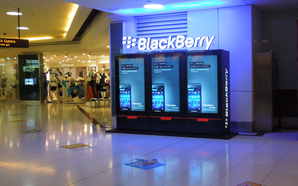 Digital outdoor was also roped in at IGI airport T3, Times OOH property. Three digital screens were used to display different product centric information. The location offered access to a 100% departing traffic in a direction parallel to this compact yet impactful structure, allowing for greater visibility. A backlit panel on either side was used to create a letter cut of the logo on the top to increase TOM recall.
"The Blackberry campaign at Terminal 3 has once again reinforced our leadership in the Digital OOH space. The creative thinking and flawless execution behind the campaign in a collaborative manner with the client, is a testament to our abilities as an organization, adding another jewel in the long list of innovative solutions created at TIMDAA,â€ Rohit Chopra, CEO, TIMDAA.
The brand and the agency concentrated on the media planning specifically considering the target audience i.e. 25 - 45 years in SEC A. While the brand carried out an extensive campaign, they ensured to reach the right target audience.  "In case of OOH campaign, if we have to trade-off between a property which would give high footfall but the wrong TG to another property which would give lesser footfall but the right TG, we would probably go for the latter oneâ€, explains Ashish. 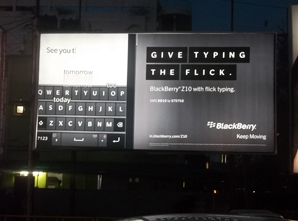 Speaking about the synergy between the client & the agency, Kaushik Chakravorty, COO, Vivaki Specialist Services says, "It is indeed a privilege to have a client whose synergies are not limited to thoughts but also co-creates with us in practice. We have been working with BB for the last few years and it has always been our endeavor to contribute in their success, as our successes are dependent on this.â€

According to the brand's matrix and report, the recall percentage has increased in OOH substantially. "I think it has delivered what it was supposed to do, in terms of communicating the platform and the product to the TG. The sales have been excellent, it is difficult to connect the direct sales to OOH but yes sales have proven that the campaign has been able to achieve its objective. Vivaki Agency comes with a good hardworking team and I am sure they will work hard to deliver the client's objectiveâ€, sums up Ashish.
Tags : Blackberry Ashish Gupta Vivaki Specialist Services Kaushik Chakravorty
Advertisement