Executed by Ideazfirst, the innovative campaign by Star Jalsha saw about 100 taxis in the city decked up to celebrate the wedding of the female lead in a popular Bengali soap. 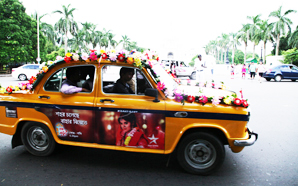 Popular Bengali entertainment channel Star Jalsha from the group of Star TV network, celebrated the wedding of its female protagonist'Baha' from their daily fiction story'Ishiti Kutum' in a grand manner engaging one of the most popular transit media of Kolkata -- the yellow cabs. The narrative depicted a scenario wherein everyone in Kolkata attended their favourite character Baha's wedding. What's more, Star Jalsha created an element of surprise for even those who did not watch the show, thus upping the curiosity factor around the decorated taxis.

Kevin Vaz, President and General Manager, Star Jalsha, Jalsha Movies and the English Cluster of the network, shares, "Baha, the lead character in'Ishti Kutum' has been one of the most popular characters in Bengal over the last few years. Her name, way of talking, her style and her struggles in life have moved people in Bengal. After a lot of ups and downs she was getting her well-deserved social respect and acknowledgement. So this was a moment of glory not only for Baha, but for all the viewers of Star Jalsha as well. So it was not just a celebration of Star Jalsha, it was a celebration for everyone in the city.  And everyone was waiting to witness Baha's marriage. Hence, we thought of sprinkling this celebration in the city. And the best way to do that was to convert the regular cabs to'wedding cars'. We kept the message as'Shohor choleche Baha'r Biyete' which means'this city is going for Baha's marriage'. So everyone riding the cabs actually seemed to go for her marriage.â€
Executed by Ideazfirst, the agency directly handled the coordination with taxi owners which was quite a challenge for them. Speaking on this, 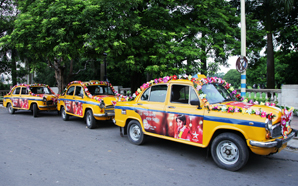 Rajesh Kishanpuriya, Managing Director of Ideazfirst Marketing Services (P) Ltd, informs, "Star Jalsha Brand Team suggested the decoration of the taxis and asked us whether we could brand the taxis as wedding cars without reserving the taxis and making passengers board them as usual. Then we started planning the feasibility of the same, and we had to make sure that the taxis could run at their own speed without the flowers falling down or drying away. At the beginning the taxi owners did not want to get this done due to several apprehensions such as the Traffic Police fining them, passengers' reservations to board the cabs or the likely damage to the taxis because of the wires flowers etc. We did the branding with vinyl pasting and decorated the cabs with flowers.â€

Ideazfirst carried out this brand activity in about 100 taxis to convey the wedding celebration of the lead character "Bahaâ€ across Kolkata. The channel's tag line "Chalo Paltaiâ€ which means'let's change' was also fulfilled by the innovative road show which started in front of the Victoria Memorial where all the taxis were lined up one after the other and created enough curiosity among the Kolkatans, especially the morning walkers. This outdoor campaign could automatically engage the viewers. Almost every individual in Kolkata saw at least one branded and decorated taxi during their travel, as the taxis reached out to every nook and corner of the city and became a talk of the town.
"We did not really conceive this activity to increase ratings. For us, it was for the sheer joy of sharing the spirit of celebration with our viewers, and people loved it. It was not done to showcase show's increased ratings,â€ clarifies Kevin Vaz. Well, whatever the objectives, the campaign certainly created a splash for the channel brand.
Tags : Star Jalsha Ideazfirst Kevin Vaz Rajesh Kishanpuriya
Advertisement