'Pudhu Yugam', which translated means'New Age', is a new TV channel launched in Tamil Nadu that goes beyond being a typical General Entertainment Channel. The brand's widespread launch campaign in the state through the OOH media in partnership with agency Vivaki Specialist Services was all about highlighting the brand values among its TG. Here's a look.

The USP of newly launched Tamil TV channel'Pudhu Yugam' is its very content, which goes beyond regular entertainment, reaching out to audience across socio economic categories. The brand therefore wanted to promote the launch through a sharp and focused outdoor campaign which reflected this.  A large scale and diverse campaign was thus launched across Tamil Nadu covering several districts, cities, towns with multiple OOH formats using over 3 lakh square feet of OOH printing across three rounds of creative displays. The campaign started with a teaser for two weeks followed by the launch and unveiling the brand which in turn was followed up by the sustenance activity.

Says R.B.U Shyam Kumar, CEO, Pudhu  Yugam,  speaking about the campaign and the role of OOH, "It was a 2-phase campaign;  we wanted to strike a chord with the consumer by going for a creative that was topical in nature.   And we wanted OOH to be the tent pole of our brand campaign.â€  The brand allotted 25 - 30 % of the marketing budget to OOH and, as Shyam Kumar says, wanted a "straight and simple campaign with maximum reach across the TGs in Chennai & ROTNâ€.

Avinash Swamy, Associate Vice President, Vivaki Specialist Services, says sharing his thoughts on the brand and the campaign, "Puthu Yugam is not your typical General Entertainment Channel. As a matter of fact the programming content is very innovative catering to a vast cross section of population in Tamil Nadu. There are several "firsts" in the programming aspect that the channel has attempted. And since OOH was the lead medium, the treatment to the campaign needed to convey a differential edge that cuts across various socio economic categories in order to gain respect and acceptability amongst its TG.â€


He adds talking about the thought process that went into the creative of the content, "With over 55 channels in TN of which are 10 GEC's, with 4 leading channels, the task for the OOH was clearly cut out -- differentiate in all aspects of the planning and execution! The communication and OOH placement had to be sharp and focussed to an extent such that it not only excites the TG, but also attempts to engage with them across various OOH opportunities that they are exposed to through the day. There have been instances wherein such opportunities were specially created given the scarcity of media options in the state.â€ 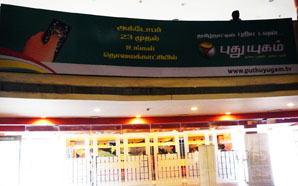 Since the scale of the campaign was massive and the TG was diverse and not specific to any particular demography or age group, there were multiple creative communication messages.  This, according to Avinash,  brought in several challenges that needed to be tackled first. For one, the content had to be handled differently across different districts since there are diversities across the state, although Tamil is the common language.  "Madurai had to be handled very differently from a Coimbatore or Thiruvallur or Mayiladuthurai. So obviously a one-size-fits-all approach is ruled out. A thorough understanding of the TG across various districts coupled with their OOH media exposure patterns and aligning the same with multiple OOH formats most of which were specially created for the campaign keeping in mind the objectives; these were some important factors that were kept in mind while working on the media plan,â€ explains Avinash.

The other challenge for the agency was OOH inventory and vendor management across 32 districts.  But the team's effective mobilising of the vast number of vendors across the 32 districts, backed by in-depth understanding of the nuances and intricacies of the state helped in overcoming the challenges. Adds Avinash, "It was in November 2009 that Vivaki executed the Uninor OOH campaign across 22 districts in TN using multiple OOH formats and this set the benchmark for the massive scale of the activity. But this pales in comparison to the depth and scale of the'Puthu Yugam' channel launch in TN. " 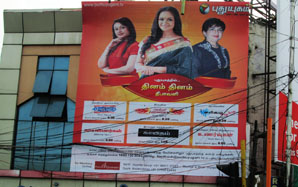 Shyam Kumar further adds, talking about the challenges, "Short turnaround time was the biggest challenge at every stage. This was overcome by sheer will power. Also, some OOH creatives were perceived to be controversial and attracted the attention of the authorities. But we convinced them with our clarifications.â€

Well, the campaign seems to have received a very positive and encouraging response.  Says Shyam Kumar, speaking about the impact of the campaign and the role of the agency, "We got very good support from the agency. The response has been phenomenal.â€
Tags : Pudhu Yugam Vivaki Specialist Services R.B.U Shyam Kumar Avinash Swamy
Advertisement