'PPP is the way forward'

Hoardings may be banned in the state of Tamil Nadu, but with a judicious mix of planning, discipline and the right approach to OOH aesthetics, there can be a win-win situation for all concerned, says Anhsul Mishra, Joint Commissioner -- Commercial Tax Enforcement, Chennai & Former Commissioner, Coimbatore Corporation. 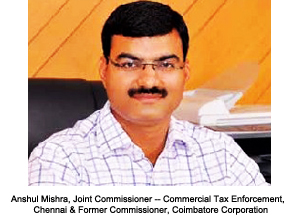 Out-of-home advertising should basically be a model from  which  the  government  and  local  bodies  can generate considerable revenue and which at the same time  ensures  infrastructure  development wherein money is invested by the agencies on a Public Private Partnership (PPP) model. We started with a similar kind of PPP model for the first time in Coimbatore. Beatification was one objective, but we also wanted to create various infrastructure facilities such as bus shelters, footpaths,  street lights etc at various places. The contract was designed for 6 years and the focus was on infrastructure development. About 256 bus shelters all over Coimbatore city were auctioned through an open tender in bid-cum-auction and the highest bidders were  awarded  the  work  of  erecting  stainless  steel bus shelters with right to display advertisement on a specific area. This generated around Rs 2 crore per year as advertising fee for the local body.

Before this, we had called for Expression of Interest For beautification and maintenance of Race Course area in Coimbatore. There was no response for a long time as there was no precedence.  Finally, we got response and Race Course was handed over to the successful bidder for beautification and maintenance in lieu of advertisement rights. Basically it is a win-win situation, when bidders are assured of some profits, they will put in money. As the Authority we will always like to have a model where we give license to those advertising agencies that put the money in public infrastructure and that is where the partnership comes in.

PPP is definitely the buzz and the way forward and has lot of scope in Tamilnadu.

Revenues from Out of Home advertising

We never had any targeted revenue but out-of-home does offer a lot of potential for revenue. Some local bodies earn good revenues from the PPP model and things like big entertainment parks, apart from bus shelters, footpaths and street lights are good options.

It has basically got to do with mindset. The official machinery has to change its mindset towards PPP and explore the possibilities of tapping the real potential. Advertising offers great potential to explore. And this is happening everywhere.

Digital medium is very much possible though, again, it is not happening. We have tried digital medium but people shut it down due to local issues.  Also, there are smaller local agencies who don't want new infrastructure to come in. They can't invest as they have low budgets. This is not a big issue but is an issue nevertheless.

Most of the hoardings are erected in violation of existing rules and regulation and without valid permission of the licensing authority. In Madurai last April-May, we removed over 5000 hoardings as those were all illegal. Because of this, people were compelled to come through the legal channel. Regulation becomes important because unless you remove illegal hoardings, the PPP model won't work and legal channels will not open up. From the client's point of view this might be a challenge, as they want big sites.  But we have to ensure that the agencies build a good infrastructure and maintain it and in lieu of that advertising rights are given. Packaging the sites based on the potential of the area such as market area, commercial area and non-commercial area etc and having groups for each within the Corporation worked well for maximising the revenue potential.

Message to media owners and advertisers

The first message for the media agencies is -- Follow the rules. They should only adopt the legal channel. Also, they should explore the possibility of the PPP model with the government and especially with the local bodies and I am sure that there is huge potential for that in terms of the utility value.