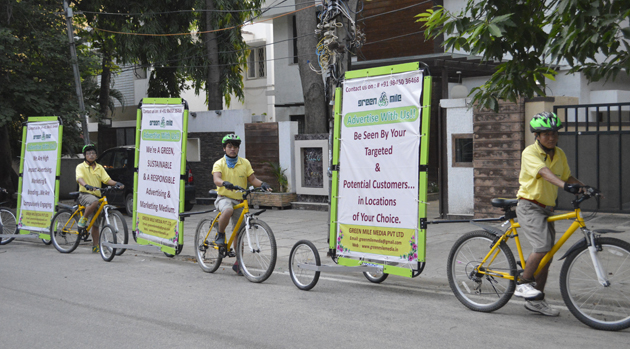 Bicycle Billboards, a very popular concept in some western countries, are now set to wheel around the major cities of India. The initiative by Green Mile Media began in Bengaluru and hopes to trail into Chennai and Hyderabad soon. Green Mile Media is a green initiative that promotes sustainable advertising, marketing & branding without polluting the environment. They engage their audiences in a Clean, Green & Compulsive way.

The company sees this as a cost effective media for advertising, besides being an effective method for incorporating location based geo-targeting into brand marketing. An experiential media in all rights, bicycle billboards will capture the attention of the city very soon.

The excitement around this new media can be understood with the unique selling points of the media. There is longer audience engagement owing to the fact that it is an experiential medium. The people riding the bicycles can provide a much needed human connect to make for an interactive media. Localised targets can be achieved based on the client's requirement. The excitement around the media is significantly higher due to its uniqueness, which can make heads turn. The concept also touches upon the need to cater to the pressing environmental needs by adopting a means of transport that virtually causes no pollution.

The company is currently engaging in marketing the media and has planned to put out five bikes in each of the promising localities of Bengaluru - a total of 100 bikes to cater to the green advertising initiative that they are keen on executing. The company also wishes to extend this media into the night time with backlit billboards.

Riding away from the usual clutter of hoardings within the city, Green Mile Media has set a new trend for brands to look out to and invest in. The owners of Bicycle Billboards are more inclined to move in the upmarket places with good clientele and around day time traffic for the success of their innovative venture.

Timmy Victor, Founder and Director of Green Mile Media Pvt Ltd, says, "Branding, advertising & marketing in the OOH space has just got a little more exciting. With so much concern around us about the environment, pollution and health hazards for city road users, ours is just one of the many initiatives and innovations to create a healthier and smarter bicycling culture.â€

Christo Kumar, Co-Founder and Director, adds, "Even in the western countries people are using their bicycles not only as a healthy commuting option but they're beginning to find many other uses for their bicycles including for advertising, shopping [cargo bikes] and fitness.â€

The grand ideation of this new media comes as a fresh initiative into the Indian OOH industry. The challenge that the cyclists have to face within the city of Bengaluru is the outrageous traffic that is a part and parcel of the city. The success of the media is resting on the strategic implementation of the concept and the inclination of brands to invest in this budding media format.