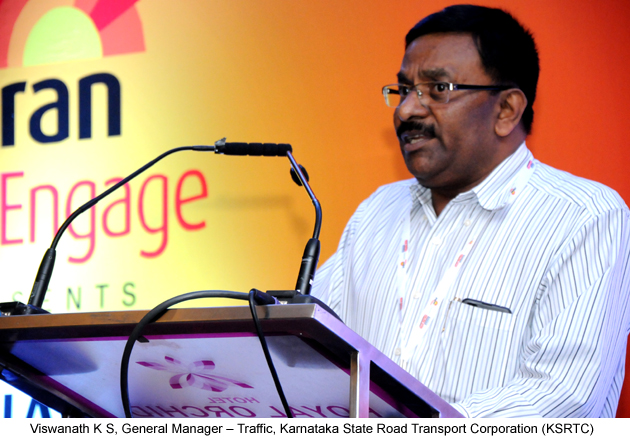 Viswanath K S, General Manager - Traffic, Karnataka State Road Transport Corporation (KSRTC), spoke about how Outdoor can leverage KSRTC infrastructure across urban and rural landscape. With innovation as its Mantra, Commitment as its Sutra and Technology and superior infrastructure as its Vaahana, KSRTC has set itself as a role model of an efficient and adequate road transport system.

Vishwanath said that KSRTC has been a rapidly growing and revenue-generating organisation since its inception and the reason behind this is their dedicated workforce. Fleet modernisation, and strengthening of infrastructure are something KSTRC always focuses on and this is the reason why all its 15 operating divisions are making profit.

Talking about IMTC (Inter Modal Transit Centre), he said that it has substantial advertising space. Gone are those days when bus stations used to be dingy places. Today with shops, eateries, live television, air-conditioned waiting rooms, KSRTC has turned bus stations into new landmarks of the city.  It is the KSRTC working staffs who undergo special behavioural training, as they are the link between the customers and the organization. KSRTC caters to all segments of society.

KSRTC has come a long way with its high-end luxury buses having chemical toilets, pantry and entertainment system with over 60 channels. It is India's largest fleet operator of world-class buses. Volvo buses itself account for 46 per cent of reservation. KSRTC has implemented modern technologies like advance reservation system, mobile application for ticket booking, GPS in buses to track the arrival time.

Coming to the various advertising schemes, Viswanath focused on various areas that have potential for advertising. On bus branding, hoarding, platform board, glow sign board, public address system, CCTV, bus stands are the places where advertisements are encouraged. He was also keen on broadcasting social messages on these platforms. With Kempagowda bus station having a footfall of 7-8 lakh commuters per day, it is one of the best places where brands will get notices and have maximum impact, he said.
Tags : Vishwanath K S KSRTC
Advertisement