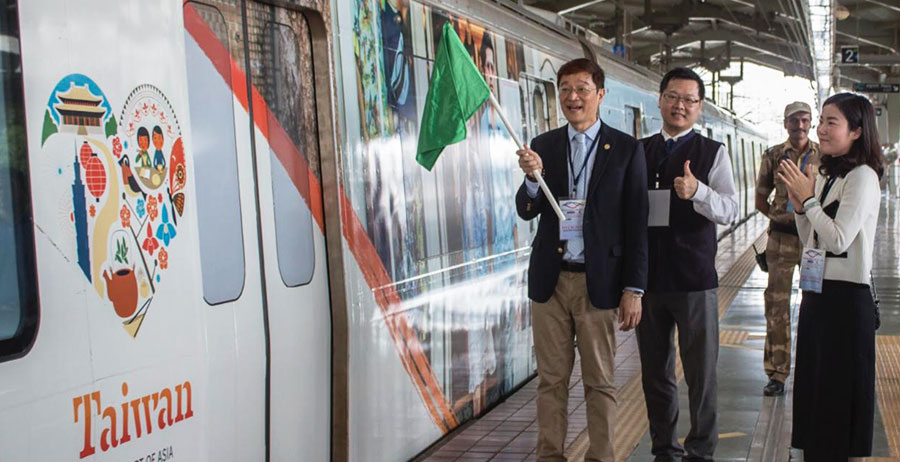 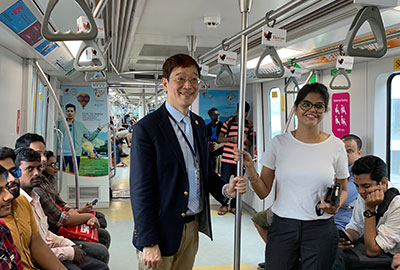 The Taiwan Tourism Bureau (TTB) has partnered with the Mumbai Metro, a rapid transit system serving the city of Mumbai, and the wider metropolitan region, to expand awareness of Taiwan as a destination and promote tourism. Dr. Trust Lin, Director, Taiwan Tourism Bureau, Singapore Office, flagged off the train wrapped in colourful campaign images, on its maiden journey from the Versova Metro Station. Featuring photos of popular web-series stars, Sumeet Vyas and Sapna Pabbi on vacation in Taiwan, the vibrant imagery highlights the great variety of holiday experiences offered by Taiwan, ‘The Heart of Asia’, as well as its rich history and scenic beauty.

This special Mumbai Metro train, handled by Times OOH, is scheduled to run a month, also in conjunction with India's Independence Day. There will be a Taiwan Train for every 7 trains that stop by each station, reaching out to Mumbai Commuters at a high frequency.

This campaign is part of TTB’s continued efforts to raise awareness among Indian travellers and increase the number of Indian visitors to Taiwan. Underscoring the importance of India as a tourist market, over the past year, TTB has increased its marketing budget for India by six-fold, taking it to US$1.2 million annually.

The Indian market is one of the fastest growing markets in the world and Indian travellers are amongst the world’s highest spenders. In the first half of the year 2019, there was a 6.8% increase of Indian visitors to Taiwan. TTB has listed India as one of the focus countries for its New Southbound Policy targeting South and Southeast Asia and have allocated significant budgets of more than US$1 million to attract tourists from India.

Aiming at a goal to establish Taiwan as a year-round destination of choice with top of mind recall for Indian travelers, TTB has planned a host of marketing activities to help grow the share of the Indian travel segment to Taiwan. A “2 20:20” strategy was put in place last year to grow the Indian traveller segment by 20 per cent by the year 2020. The aggressive outreach strategy includes road shows and tie ups with Indian media companies, such as multiplex chain INOX Leisure Limited, to film and shoot a television series in Taiwan. A series of television commercials will also be rolled out in the coming months. The campaign will promote Taiwan as a multifaceted destination while also enhancing specialised segments, such as golf clubs and cruises to drive the top 2 per cent of the Indian market.

While talking about the marketing initiatives, Dr. Trust Lin, Director, Taiwan Tourism Bureau, Singapore Office said, “We want our Indian friends to recognize Taiwan’s beauty. Taiwan is an untapped territory with umpteen opportunities for travellers to explore and has witnessed an exponential growth of Indian tourists lately. With its close proximity to India, it is an ideal getaway for the Indian traveller with great options for adventure, MICE (Meetings, Incentives, Conferences, Events), family fun, golf, romance and wellness.”