When it comes to innovation in OOH, there are no limits. Be as creative as you can get and you will surely reap its benefits! A standing example of this is Kissan's new'Growing, living billboard'. 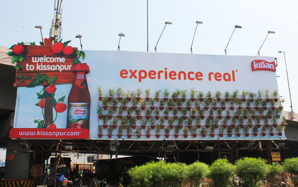 Kissan Ketchup, a star brand from the house of Hindustan Unilever Ltd., is positioned as an ingredient that makes bland food palatable, adding a delectable twist to any snack. Ketchup is what every kid reaches out for the first thing and Kissan Ketchup's USP is its 100% real tomatoes as the core ingredient. Recently, the brand undertook a series of interactive initiatives involving thousands of children to communicate its core proposition'Kissanpur - Experience Real'. Eighty thousand children participated in the Kissanpur activity last year.

In its latest OOH campaign, the brand focused on innovation, mirroring all other communications that it kicked off. In fact, with an objective to push the envelope, the brand went a step further and added the'Experience real' communication to the outdoor space campaign. Shunning atypical OOH route of mockups, inflatable and motorized movement, the brand decided to go a step further. Along with Arena - the OOH agency for Unilever in India - the brand brainstormed for days in order to come up with something that touches the consumer in a unique way and helps them realize the importance of the message'Experience real'.

The outcome of this rigorous brainstorming was an idea that took on one of the boldest OOH execution strategies ever attempted to create a LIVING and GROWING billboard right on the busy streets of Mumbai.  Three spots were selected in Mumbai for their visibility and high traffic pass-through - Juhu, Mahim Causeway and Peddar Road - effectively covering Mumbai. 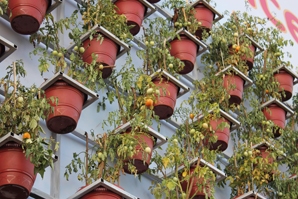 Commenting on the campaign Suresh Balakrishna, CEO, Lintas Initiative Outdoor, says, "Kissanpur's first initiative was a great success. This made us enter phase two, where our objective was to reach a larger audience. What better than OOH, a larger-than-life medium to do so. Thus we came up with a one of its kind OOH campaign. The beauty of Kissanpur phase two is its unique launch through OOH. We believe in providing object oriented OOH solutions and this campaign is a standing example of the same.â€

A lot of efforts were put behind to convert this idea into reality. Farmers were contacted months in advance to propagate tomato plants in planters and this was planned to have the plants ready for the billboard in time for the Earth Day. The billboard structures were prepped and readied to display dozens of these planters that were coming straight from farms. Backlit boxes and pot holders were welded into place based on sketches created by Arena. The three sites are now not just a static OOH media, but a living and fruiting piece of real estate. Unlike a normal OOH innovation, these three sites require daily attention and care. Special teams fan out every day to water and report the health of these plants.
The transformation of green tomatoes to ripe, red juicy fruits will be an experience for city slickers as they see this happening in front of their eyes.