The second phase kicked off in Mumbai takes the people's engagement levels with hoardings to the next level. 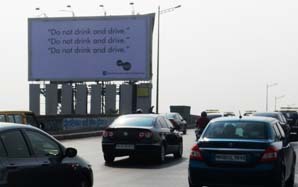 RoshanSpace has revealed Phase II of the'Billboard Talking' campaign which, in its first phase aimed at changing people's perception towards billboards. In the current phase II, the campaign communicates with the people of Mumbai city around common societal issues and gives them the opportunity to have their message displayed on billboards, through a contest.

The messages have been placed at certain strategic locations meant to help people relate to them. For example, the billboard near Jaslok Hospital carries this message for motorists: "Absolutely, positively, no honking here!â€ and the two billboards near the Worli Sea Link ask people to "Thinkâ€ and "Doâ€.

The Talking Billboards campaign across Mumbai essentially focused on initiating a conversation with thoughtful observations related to society. Messages like'Do not drink and drive', especially relevant during the party season in December, and'Throwing stuff out of the car doesn't make it clean?' etc drive home some common social concerns. Some of the messages are also an attempt to reach out to the youth in order to raise awareness on important issues. Also billboards with the message'Ideas Welcome!' imply that people can post their suggestions on RoshanSpace's Facebook page and the idea with the maximum votes would go up on a billboard in Mumbai as part of the campaign.

The billboards can be seen in Worli, Mahim, Prabhadevi, Peddar Road, Juhu, King's Circle, Dadar Tilak Bridge, Cadell Road and Haji Ali among others in the city.

"With the second phase of the Billboard Talking campaign, we want to highlight the evolution of billboards from a simple medium of advertising to being an integral part of society. The billboard has always been perceived as a silent observer but is now changing this perception by connecting directly with its audience and igniting their minds through its topical and humorous messages at key touch points,â€ said Junaid Kader Shaikh, Managing Director - RoshanSpace.