The Yak is Back in QMS' latest Digital OOH Campaign

This temperature driven campaign marks the evolution of the Yak in the outdoor media domain with QMS previously working with Lazy Yak to deliver an impactful brand campaign across the company's digital network earlier this year. 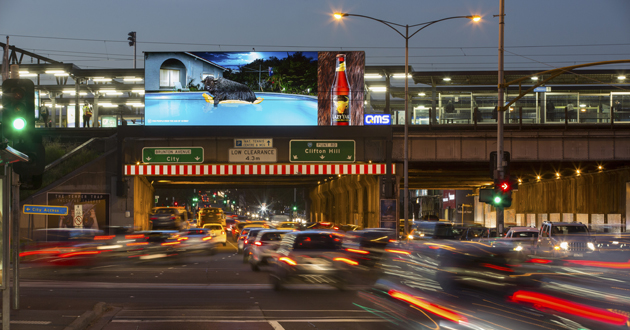 QMS Media, in partnership with Lazy Yak have launched a dynamic digital billboard campaign across VIC, WA and QLD that utilises creative triggered by the weather to promote the popular Pale Ale.

In an outdoor media first for Lazy Yak, the innovative campaign utilises the services of QMS' Digilab to employ real time weather feeds, sourced from the Bureau of Meteorology, to dynamically change the Lazy Yak creative based on the temperature at each billboard location. The digital technology developed in partnership with technology specialists doohfa, allows windy, sunny and rainy weather triggers to be implemented based on set weather parameters so that the campaign creative, featuring Yak in the pool, updates accordingly. For instance, the windy creative, which depicts the Yak being windswept across the pool, is shown when winds are 25km/h and above.

General Manager - Operations at QMS, Steve Bovey highlighted the extreme relevancy and targeted nature of the campaign by saying, "This is an exciting campaign for QMS as we use local weather to control the creative that is displayed. With the power of digital technology, we are readily able to tailor the client's campaign using real time triggers to deliver a highly relevant and engaging campaign.â€

The campaign was developed by Lazy Yak's creative agency Clemenger BBDO Melbourne and delivered by media agency MediaCom Melbourne in association with QMS.

Head of Brand - Craft at Carlton & United Breweries, Tim Ovadia, commented on the progression of the campaign and the new technology behind it and said, "We have had a great response from our consumers with the Lazy Yak outdoor campaign, people really seem to love the Yak and he's cheeky nature. Having run the Lazy Yak outdoor campaign for some time now, we were looking for different ways to inject some new energy into the creative. The weather and time trigger technology from QMS' Digilab allows us to have a bit of fun with the Yak and put him in some interesting scenarios.â€

The campaign will run until 10th July and will feature fully animated creative on selected sites, such as Glenhuntly in VIC and Cavill Avenue in Surfers Paradise.