Message in a bottle

john st., a Canada based independent agency, developed an innovative but simple campaign called'Stop the Drop' to raise awareness on dropping water levels. 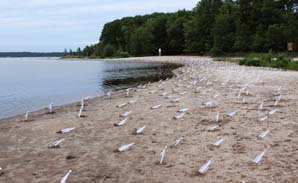 Once Leo Burnett said, "Make it simple. Make it memorable. Make it inviting to look at. Make it fun to read.â€ Following these words now is john st, a Canada based independent agency, which has developed a well appreciated campaign backed by a simple idea that achieved the desired results and recognition. The campaign'Stop the Drop' was developed for a Georgian Bay-based not-for-profit organization and the objective was to raise awareness about the alarming drop in Lake Huron's water levels and drive government action on the issue.

The campaign saw over 2000 bottles being spat up on the shore with a message inside the bottles from Georgian Bay which drove home the fact that something had to be done about Lake Huron's dropping water levels before it was too late. Visitors of the beach were greeted by an unusual campaign wherein the concept was about the Bay personally reaching out to its friends. Thus the letters were printed using a technique that gave the type a watermark-like appearance. 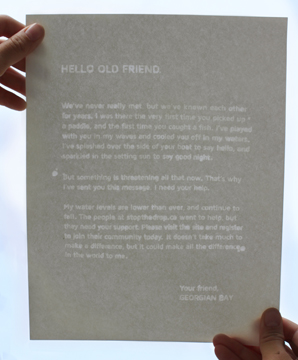 The media planning was designed to engage the public in support of government action to address the alarming and unprecedented drop in Lake Huron's water levels. Therefore the Killbear Provincial Park's'Day Use Beach' was used to convey the message.

The ideation done by the agency was surely straightforward; however the method of delivery was innovative. "People go up to the Bay to escape and unplug. We had to reach beachgoers without modern media like TV and online. So we delivered our distress call from the Bay using one of the oldest methods in the book - the message in a bottle,â€ says Angus Tucker, Executive Creative Director, john st.

"These are our Great Lakes, but they are becoming less great every day. Lake Huron hit its lowest recorded level in January 2013, and remains well below its'crisis level' established 20 years ago.  Local communities and businesses are threatened, not to mention our fishing, farming, mining, shipping and logging industries. Wetlands, spawning grounds and wildlife are also in danger. Our online community makes it easy for all who use or enjoy the lake to stay informed about this issue and make their voice heard,â€ says Colin Dobell, Director, Stop the Drop.

The campaign Stop the Drop's first goal was to build its online community to 20,000 registered members by Labour Day. "We need to show our elected officials that there are a lot of voters in these areas who are watching to see that something gets done,â€ adds Dobell.

This one is another classic example of how a creative use of OOH can even help create communities and drive social and environmental changes.