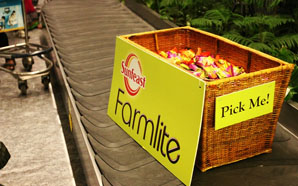 A walk through a series of mini farmlands is not something you expect to see when you approach the arrival gates at an airport. It is a happy surprise to be greeted into Bangalore city with such installations. Sunfeast has created the'farm' from Farmlite at the Kempegowda International Airport. But wait! There's more...

Sunfeast, from the house of ITC Foods had arriving passengers walk through replicas of farms intricately crafted with windmills, actual almond trees, wheat farm and a scarecrow too! Although this was quite an intriguing feature of promoting Farmlite, the surprise element awaited at the luggage belts. With passengers waiting for their luggage to arrive, the conveyor belt starts and suddenly stops. There's no sign of luggage. Some commotion can be heard which is a result of confusion among the passengers. A curtain drops and six exercise cycles are revealed. 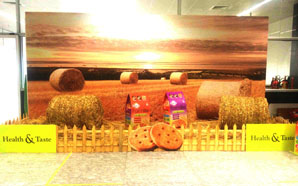 Peppy music plays with live musicians to create a fun atmosphere. Passengers are invited to peddle the cycles for the belt to start. This indication is given by colourful LED lights drawn upon the floor as if connecting the cycles to the belt. Quite a curious air fills the arrivals lounge. When the travelers peddle, the belt does start; but no luggage. Instead, baskets labeled'Pick Me', travel on the belt and Sunfeast Farmlite biscuits are up for grabs for the passengers. It was unique customer engagement program adopted by ITC foods to promote its tagline'Health and Taste'. They decided to approach it with the idea that'Staying healthy can be fun'. A very humdrum activity like waiting for luggage was converted to a surprise fun activity.

Commenting on this unique consumer engagement program, Chitranjan Dar, CEO - Foods Division at ITC Foods, said, "Sunfeast has a premium presence in the biscuits market. With the launch of Sunfeast Farmlite, we have entered into the health biscuit segment. The brand straddles the desirable space where health meets taste.â€

He added, "This product has been developed after in-depth research by our experts. Sunfeast Farmlite is a perfect combination of health and taste.â€

JCDecaux, a well-known outdoor advertising agency was appointed to carry out the Farmlite launch. They were involved in the project right from conceptualization to implementation of the project. Since they are the only concessionaire of the Kempegowda International Airport for advertising and branding, the collaboration made all the more sense as permissions for the airport are quite a task. "Airports are among the most secured and restricted transit areas. Therefore obtaining the permission and following the security protocols are the most challenging part. Also, it was the first time that such an activity was happening at any Indian airport,â€ says Alok Duggal, JCDecaux Business Head, Airport. 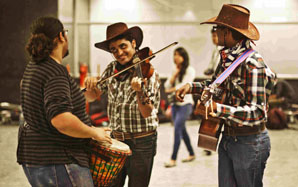 The brief was very clear. The surprise and wow element had to rule. Distributing samples was but obviously a major intent of this initiative. So, apart from the baskets appearing on the luggage belts, they were stationed at a few other places as well in the arrivals lounge and people passing by could just pick them up.

Speaking on the success of the event, Duggal said, "The fact that 1.5 lakh samples were distributed in three days to the passengers, especially women and children, speaks volumes about the event's success.â€

The unique environment of a farm has never been seen or heard about at any Indian airport. This event also created a stir in the social networks with live tweets from the passengers expressing their delight on this surprise and fun activity.â€

The luggage belt surprise was carried on 25th April but the promotion with the'Pick me' baskets and farmlands went on for two more days.
Tags : Sunfeast Kempegowda International Airport ITC Foods JCDecaux
Advertisement