Home » Campaigns » 'Just open up', says Tata Docomo and how!

'Just open up', says Tata Docomo and how!

'Communicate and Share' is what Tata Docomo has been trying to convey through their new brand promo'Open Up', a long duration 360 degree high-decibel campaign meant to promote their attractive new tariff plan. The OOH medium obviously played a significant role here.

Tata Docomo, a true OOH loyalist, has once again leveraged the outdoor medium in an innovative way to persuade their audience on their new brand philosophy'Open Up'. It is an idea that taps into the common human tendency to hold back from saying what we really feel and in the process carrying a burden of unshared emotions that last a lifetime.


A pan-India campaign has been executed to promote the idea with a strong focus on the top 30 towns at various touch points. Draft FCB+Ulka handled the creative duties and Milestone Brandcom & MOMS, OOH agencies worked jointly on the campaign. 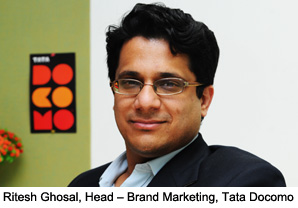 "The campaign instigates the viewer to simply open up and express their real selves. It is a voice of inspiration - a motivating force that nudges people to speak up rather than stay silent. It also highlights the brand's commitment to enable and celebrate conversations with value for money products that will enable people to speak up more often with simple tariffs such as 20p/min,â€ explains Ritesh Ghosal, Head - Brand Marketing, Tata Docomo.


The creative approach was a fresh interpretation of the core brand idea rather than an adaption of other media campaign. Thus the essence of the campaign brief was to look at ambient and non-monetized media to effectively deliver the message, and which not only served as a reminder of the TV campaign but also actively built on the thought. 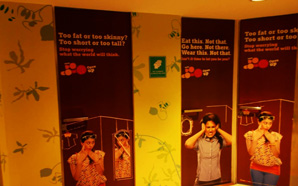 Thus two different kinds of treatment have been given to the medium:

1)    As an amplifier for presenting the aggressive'conversation enabling' products / tariffs. In addition to highlighting the tariff, to deliver thematic impact as well as to break the clutter, the creative strategy has been to use human visuals almost exploding with expression once they have unmasked (from their restrained demeanor), staying true to the core brand thought of "Open Up and Expressâ€.

2)    The thematic effect was enhanced by delivering'in the moment' contextual inspiration to'Open Up'. Here places were selected where people usually tend to be restrained such as during a Scary Ride at an amusement Park or in the trial rooms of apparel shops. The contextual messages then delivered the inspiration:  "Rides don't have ears. Screamâ€ or "Too fat or too skinny? Stop worrying what the world will think!â€

The focus was mainly on a mix of large formats to create impact, peppered with frequency builders. 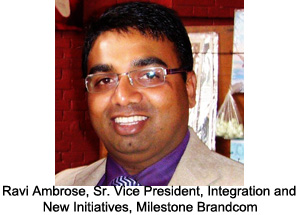 "The brief was that Tata Docomo planned to alter their brand communication. Considering their new TVC, we developed a campaign for the OOH space to create high impact but with the product relevance. We executed one innovation in Pune and we tried to innovate with the placement of advertisement in places such as trial rooms, amusement parks etc. We have used formats such as billboards, kiosks and BQS, but to go beyond conventional, we will be partnering with CCD, MCDonald's and other hangout places in the next phase of the campaign. In addition to this, an engagement activity has been organized to interact with the audience,â€ said Ravi Ambrose, Sr. Vice President, Integration and New Initiatives, Milestone Brandcom.