Cadbury in its new campaign for Dairy Milk has decided to indulge the people of Bengal with two of their hot favourites- Football and \'Mishti\' or sweets. OOH was one of the key media vehicles for the engaging campaign.

Cadbury Dairy Milk recently rolled out an innovative outdoor campaign with the vision  to pay tribute to Bengal's favourite sport- football. The brand went in for a mass activation with the campaign'Mishti Shera Shrishti' in association with Anandabazar Patrika and The Telegraph . The campaign began in February and continued till March 2014 covering almost the entire state including cities Kolkata, Burdwan, Durgapur, Asansol, Siliguri, Krishnagar, Behrampore, Chandennagore, Barasat and Madhyamgram.


According to the brand, the objective behind the campaign was to combine both'mishti' or sweets and football which are very dear to the Bengali community, though the two are not usually coupled together on many occasions (except for'mishti mukh' to mark celebrations after a victory). Given the apparent misfit , they have rendered the creative expression of the campaign as'ANASHRISHTI' (meaning queer) with a tagline of'football and mishti eki anashrishti'( 'Football and sweet what a strange idea!'). The campaign celebrated the best of World football remembering the all eight World Cup winning countries, ever: Argentina, Brazil, England, France, Germany, Italy, Spain & Uruguay. Each outlet (out of a total of 100 outlets) has created eight special'Cadbury Sweets or Mishtis' celebrating each team, named as Argentine Magic, Brazilian Samba, English Freekick, Spanish Tiki-Taka etc. People were invited to taste the sweets and to vote for the most liked sweet item. To engage more people with the campaign, voting system have been created by dialing Toll-Free 1800 200 9441 (lines open 24x7) and the lucky draw winner is to be picked from among the'voters', who will get to fly to Brazil to see this World Cup. 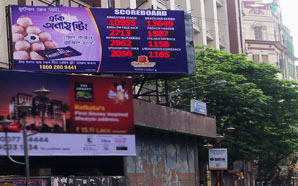 The Creative Agency of Cadbury is ABPONE and the Outdoor agency is Kinetic Advertising India Pvt. Ltd. who provided the entire campaign solutions to them. To hit the relevant audience, Cadbury selected traditional media in premium locations and key junctions near the big and most reputed sweet shops in the cities of Kolkata, Bardhaman, Durgapur, Asansol, Baharampur and Kirshnanagar. As a part of the outdoor innovation they uploaded live score updates on two premium LED billboards in Chandni Chowk and Rashbehari Avenue area of Kolkata, on the basis of the votes/consumer responses received from the consumers.  Such live updates were done by using advanced software operated from Kinetic Kolkata office. People can view such live voting score while passing through the way and the score can be updated as many times as provided. OOH has been considered one of the key media vehicles to create the buzz for the campaign and the other essential formats used included FOB, Billboards and monopole.

Further, the brand,  in order  to extend the'kuch mitha ho jaaye' campaign and increase relevance for the brand during sweet eating occasions in Bengal, teamed up with ABP ONE to reinvent the campaign in Kolkata, the sweet capital of the country. According to the brand, Bengalis were introduced to the Cadbury Mishti- an innovative adaptation of traditional Bengali sweets using Cadbury Dairy Milk as an ingredient- a new category of sweet or Mishti altogether. The campaign, titled 'Cadbury Mishti Shera Shrishti in association with Anandabazar Patrika and The Telegraph' used relevant themes to connect with consumers and ensure Cadbury Mishti's prominence in the consumer mind space. According to the brand, over the three years, the category growth numbers have constantly increased. Consumer behavior studies have also reportedly reflected how successfully Cadbury Dairy Milk has gained acceptance as another variety of mishti, thereby bridging the gap between Cadbury and'Meetha' in Bengal. With Cadbury Mishti, Cadbury Dairy Milk has surely struck the right,or rather a sweet chord, with the sweet loving people of the state.