Amit Kapoor, MD, US Advertising highlighted the evolution of media and the factors that made it powerful at the first Transit Media Talks Conference held in Mumbai on February 28th 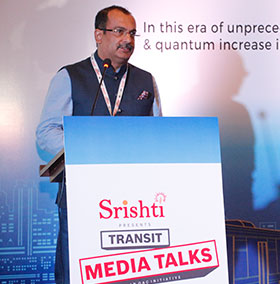 Amit Kapoor, MD, US Advertising, in his concluding session at the 1st Transit Media Talks Conference, held in Mumbai on 28th February 2019, emphasized the size and opportunity of the OOH market.

He gave an insight into the market size of OOH, which is about Rs. 3200-3400 crore. Out of this, the share of transit was approximately 25%, standing at Rs. 800 crore, he said. He also said he expected the overall transit media to grow to Rs 4300 crore.

Speaking about the opportunity in transit OOH, he said it had the potential to carry billions of dollars’ worth campaigns covering the entire nation. He also spoke about the role of technology and how it could be used to capture more visibility across OOH mediums.

He finally spoke about government spends in transit media and cited the example of the impactful Saubhagya campaign, in which US Advertising played a key role in rolling it out across 26 airports.