Following the success of ‘Share A Coke’ campaign which was meant to ‘rejuvenate relationships’, Coca-Cola India, has taken the personalized campaign a notch further with #SayItWithCoke. The campaign aims to deepen Coca-Cola’s connect with consumers by uniting them through a universal passion – Music. 140 songs in five Indian languages have been included on labels of Coke bottles. The 360-degree campaign has been executed on TV along with a heavy OOH splash. The OOH mandate for the Coca-Cola is handled by GLO, the out-of-home division of Lodestar Universal McCann.

The OOH campaign was executed in the northern belts i.e. Delhi, Punjab & Haryana for better reinforcement of the brand message, especially during summers. The campaign has been rolled out on a mix of impactful media options at critical touchpoints for stature and frequency formats, reportedly through 150 media elements and 40,000 sq.Ft. area of brand display across the key markets.

The campaign was augmented by a couple of unique clutter breaking Bus shelter innovations.

One innovation witnessed a LED ticker mounted on top of a musical bus top. The strategically selected bus shelter played songs that were promoted on the Coke packs and simultaneously displayed lyrics on top of the shelters. It was an immersive initiative that saw the audience engage with the brand at a place where they would least expect and it also enabled the brand to strengthen its connect with consumers through music, according to Coke.

On other but shelters, the agency decided to put up musical notes with the message, ‘Say it With A Coke’ that was mounted on top through backlit acrylic cut-out that dazzled in the night. 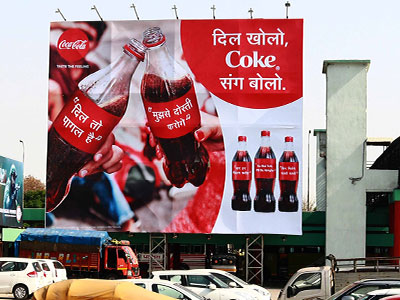 Shrenik Dasani, Vice President, Sparkling Category at Coca-Cola India & South West Asia, The Coca-Cola Company said, “Coca-Cola always seeks to uplift everyday moments and make them special. In India, songs have always had a way of expressing emotions in a special, memorable way. This is what inspired us to bring to consumers our latest campaign #SayItWithCoke, which invites them to share a Coca-Cola with someone to express their heartfelt emotions through the words of their favorite songs. Whether they do this physically or digitally, we are sure they will make many moments sparkle. What’s more, our brand ambassador Ranbir Kapoor joins us in extending this invitation in a way only he can, and together we hope to bring a smile to fans everywhere.”

For the #SayItWithCoke, Coca-Cola India conducted a survey amongst Indians in the 18 – 25 age group to identify the most popular songs to express feelings. The preferred list of songs included timeless classics as well as timely songs to capture wide range of emotions. This process helped the company understand the songs that best capture feelings and emotions of today’s youth. Labels have been created in five languages including English, Hindi, Punjabi, Tamil, and Bengali. The campaign also introduces interactivity feature with the packaging that enables consumers to get access to custom playlist to suit their feelings and emotions.