#AirtelThanks customers with multiple offerings in one unique OOH campaign 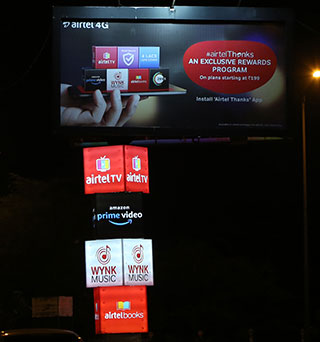 #airtelThanks, the recently launched campaign by telecom giant Bharti Airtel, did rounds in the market over the past few weeks and was one of the most visible campaigns across all advertising mediums. Launched as a mix media campaign, it was intended to create awareness about #airtelThanks, a program tailored to offer wide range of exclusive benefits to its customers.

While TV and digital channels became the launch pads for the campaign, the brand gradually amplified it through an extensive presence in the OOH space, leaving footprints at more than 1000 touch points across 100+ markets for a period of 2 weeks. For a campaign like #airtelThanks that had multiple offerings for diverse target groups, stepping out of the home brought the brand under the sun to reap good fortunes. The medium helped the campaign reach a wider set of audience, while also tapping the ones with limited access to the mainline advertising 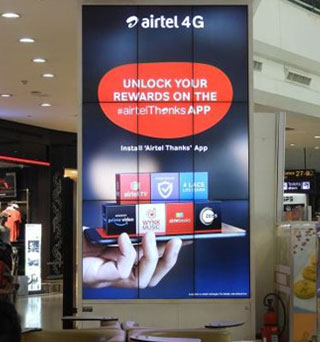 Handled by Milestone Brandcom, the OOH campaign was executed with a twofold approach wherein the primary objective was to retain the brand’s premium-ness and the secondary objective, to clearly position the product offerings across different target groups. The scale, visibility and the dramatic effect of OOH further helped to capture consumer attention in big numbers.

The brand also reached its audience through a massive number of mass transit media spots. Metro trains on prominent routes in Delhi, Gurgaon and Mumbai were branded, along with the stations. In Mumbai Metro, network of digital screens across the stations also ensured that the communication was well heard. Smart branding in Mumbai Local trains further strengthened the reach.

Premium digital and static OOH positions at the airports were used to communicate to the customers, with a subtle hint of the brand’s premium-ness. Several palpable innovations were also executed in Delhi and Mumbai that contributed largely to the campaign success.

The campaign turned out to be a huge success for the brand and garnered positive response from all quarters.