The telecom brand decorated billboards with 500 Tri color Balloons across Meerut and Barielly to connect with the spirit of Independence Day. 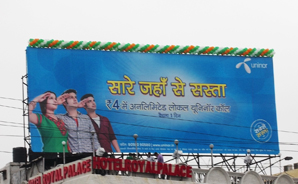 Uninor found Independence Day a good time to connect with their audiences. Therefore, the brand utilized this opportunity effectively in association with Storyboard Brandcom and executed an OOH creative to capture the spirit of Independence Day.

500 Tri color Balloons adorned billboards across Meerut and Barielly. The locations for the execution have been strategically selected by the agency at key traffic junctions & arterial routes across the cities keeping in mind the TG dispersion.

In Meerut, the innovation has been carried out on Begum Bridge on a 50x20 billboard and at Selection Point in Bareilly, on a 40x20 Billboard. Begum Bridge is a highly crowded area in Meerut and the traffic on a Holiday is even more. Similarly, Selection Point is also the main commercial hub and market area in Bareilly and hence the right location to garner audience.

"The brief from the client was very clear and precise; they wanted to establish Uninor as the'SabseSasta' brand on Independence Day. We integrated the Tricolor of the Indian Flag onto the billboard, to effectively communicate the message to the TG. No other brand has reached out to its consumers in such a way, therefore the impact created by the idea in the minds of the consumer was more noticeable,â€ said Ravi Ambrose, Sr VP, Storyboard Brandcom.