TIMDAA, a company known for driving state-of-the-art structures for clients, is now in the Limca Book of Records for installing the biggest site in the country, at the Indira Gandhi International Airport in New Delhi. 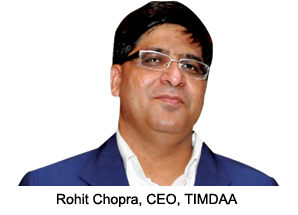 After having received accolades for their digital formats such as the Video Wall and digital kiosks, TIMDAA has now set a national record to be featured in the Limca Book of Records for their biggest site on the Indira Gandhi International Airport approach road at T3. The size of the site is 11,729 sq/ft. and it was erected in 18 months' time. The initial idea was of course to only provide a larger-than-life site to their automobile client Hyundai, but in the process the company earned the record distinction. Says Rohit Chopra, CEO, TIMDAA, "We were in discussions with Hyundai and their agency Innocean for a long time for creating something which is unique at the Delhi Airport. Our desire to create something'unique' pushed us to build one of the largest sites at the Delhi Airport. All the brands do ask us for large format sites, however due to budget constraints or creative agencies' interest, their initiatives die down.â€ Well, this time it was obviously different.

The larger than life sites were always in demand from a lot of brands, especially from the automobile category. However, this largest site happened due to demand from Hyundai. TIMDAA had already built huge sites for other brands, but they were smaller compared to this one. Rohit further shares in this regard, "We had met a team of specialists who has visited to explore the use of lenticular on this particular site. They shared with us their companies' various achievements which were featured in the Limca and Guinness Book of records and that led us to think in that direction. The record is definitely a feel good factor but not the driver of the site.â€

Building a mammoth site took a lot of hard work and time. TIMDAA conducted lot of R&D before finalizing the current format of the site. There were ample possibilities like Lenticular, wall paint, car cut outs, reflective materials, thermacol cutouts etc, which were time and again discussed on site location with various experts from the industry. There were also many restrictions which had to be dealt with. Multiple small foundations were made for better stability. There was also the restriction on drilling holes on the flyover structure. Besides, the shape of the site is irregular quadrilateral which made it extremely challenging in terms of designing the creative and final mounting of the media. The selection of the substrate was also very tricky due to varied surfaces like ACP, Glass, Marble, RCC, MD Channel etc. Finally, lot of irregular undulations on the surface also made the task difficult and maintaining the quality of the mounting was challenging due to the site conditions.

Totally 150 LED lights with 120-40-80 degree lens have been installed in front of the site to ensure proper lighting. Different kinds of lights were specially designed because of the 400 feet size of the site. The lights were installed at different directions as per the requirements.

TIMDAA and Airport are best known for their innovative and digital formats and this time TIMDAA leveraged the possibilities with the static media in the best possible manner.  As Rohit explained, "Brands have different needs. No brand wants to get missed by their target audience. They believe in sending a message every five minutes during a journey. Some brands want engagement in which the customer sees them and interacts with them and some brands want the wow factor in terms of a site look. So, all brands have their own spaces which they occupy.â€
Talking about this initiative and taking the industry to the next stage, Rohit says, "Taking Indian outdoor industry to the next level needs a lot of things. This accolade proves that the Indian outdoor industry can also do international standard activations. It is a very small one, but it has potential.â€

So what does it take to set more records like this by the OOH industry?  Rohit replies, "Primarily listen to your clients. Most of the time, brands ask for something different, but media owners are still product centric rather than solution centric. I guess they need to invest in quality and innovations. They should look at what the world has to offer in terms of materials, machines, and recently launched product features, look at whether the need is for quality at lower cost or delivery at high costs and always focus on superior stuff.  They should really be able to transform the clients' dream.â€  So, who's listening?