The larger-than-life'Dhaki' installation art was created on a moving canter which travelled through major locations in the city. 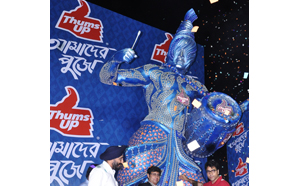 Thums Up has launched an extensive campaign this Durga Puja to enhance the spirit of the celebrations by unveiling two iconic 25 ft tall Dhaki at the famed "Deshopriya Parkâ€ and Lake Town Adhibashi Brindo pandal in Kolkata. The installation which is part of the'Aamader Pujo' campaign has been created by Kolkata's renowned artist Piyali Sadhukhan, using Thums Up currency such as bottles, caps, labels etc. During the first phase of this one-of-its-kind activation, the installation was created on a moving canter which travelled through major locations in the city. Covered with a huge drape, the piece of art was left to public imagination till the D-Day of unveiling. After almost 30 days of work, the structure has been finally unveiled for all to see on the eve of Durga Puja.

Speaking about the initiative Debabrata Mukherjee, VP- Marketing & Commercial, Coca-Cola India said, "I am so excited to be back home to celebrate this auspicious festival. Durga Pujo is an intrinsic part of every Bengali's life. There are innumerable special, unforgettable and invaluable memories associated with this festival, right from dancing to the fervent beats of the Dhaki, going pandal hopping, to savoring the delicious'Bhog'. Bearing in mind the great sense of pride and deep devotion of all Bengalis, Thums Up decided to undertake this special initiative this year.'Amader Pujo' is Thums Up's way of paying a tribute to the spirit of Bengal and an effort to make it even more special.â€ The larger-than-life'Dhaki' installation at outdoor was matched by a scintillating performance by one of Kolkata's most loved and renowned rock band, Cactus and famous Bengali cinestar Abir Chatterjee . Abir says further, "Thums Up has brought together the entire Bengali community to participate in this grand festival in a unique way - contributing to one magnificent Durga Puja installation.â€

Adding to it , Bhupendra Suri, VP - Franchise Bottling Operations, Coca-Cola India said, "This is the first time that our Durga Pujo campaign is led by a robust on-ground activation as opposed to being advertising led. We are overwhelmed by the response of consumers to this initiative. This awe-inspiring 25 feet tall Dhaki which is a result of the collective effort of Kolkattans, is an appropriate reflection of the bonding that takes place during the festival.â€ The brand invited consumers across the city to deposit Thums Up currency, such as bottles, caps, labels in drop boxes installed at select locations. The currency was then collected and handed over to artist Piyali Sadhukhan to create her magic. The result was the breathtaking installation which depicts the spirit of Durga Puja through one of the most beloved symbols of the festival - the traditional Pujo drummers.

Speaking about her experience of working on the project, Piyali Sadhukhan, an alumnus of the prestigious Viswa Bharati University said, "It gives me great pleasure to be part of the Thums Up Durga Puja campaign which has chosen installation art as a medium of communication. This art form is still evolving in our country. Working on this project was extremely challenging as I wanted to interpret the "joie de vivreâ€ associated with the Pujo in a way that everyone could relate to. Durga Puja is the victory of good over evil. It's the celebration of life and happiness and it is very close to all our hearts. I wanted to bring this out in my piece and I truly hope that the final installation speaks to the people of Kolkata just as much as it resounded with me during the creation process. Each person who has contributed towards the making of this piece has been part of this process and I think this is the true spirit of the Durga Puja festivities - one of collective enthusiasm and boundless celebrations. I wish everyone a Shubho Durga Puja and I congratulate Thums Up for undertaking such a unique and special initiative.â€