The just released FICCI-KPMG India Media and Entertainment Industry Report 2015 states that the Indian OOH industry is expected to grow at a CAGR of 9.8% to reach Rs 35.1 billion in 2019 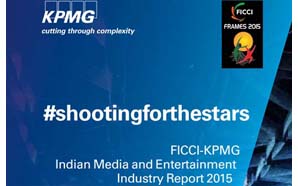 The FICCI-KPMG India Media and Entertainment Industry Report 2015 titled'#shootingforthestart', released at the high profile FICCI Frames convention in Mumbai, states that the Indian OOH industry growth in FY2014 was well beyond expectations and that the industry is poised to board a higher growth trajectory in the coming years. However, the key challenge for the industry would be to increase its share of the overall advertising pie.

Throwing light on this aspect, the report mentions that while the advertisers spent Rs 22 billion in this industry, the industry share of the overall advertising pie remained largely unchanged at around 5%. Moreover, while the OOH inventory utilisation had improved in 2014, price realisation did not improve in any significant manner. eCommerce explosion leading to major eCommerce advertising, and the General Elections in 2014 had contributed to the OOH industry's growth in 2014, the report states.

The report points out that the metros continue to dominate and enjoy more than 50% of the OOH market share, but Tier II and Tier III cities are emerging as key advertising destinations owing to improved infrastructure there, such as, malls, airports, roads, etc. Advertisers were seen to be increasingly building their reach beyond the saturated urban spots and so rural markets were expected to be an important part of the OOH media landscape in the coming years.

While billboards continued to dominate the OOH landscape, airport and other transit media advertising grew at a steady pace over the last few years; a major factor for this growth has been the rapid infrastructure development seen in the country. With the government's focus on infrastructure development, this is expected to continue to boost the outdoor industry in the coming years.

Ad spots at locations like the Metro lines in Mumbai and New Delhi, and the T2 terminal at the Mumbai airport are highly sought after by advertisers, says the report. Private airports as well as metros are better designed for monetising income from advertisements. However, LED billboards and street furniture continued to grow at a slow pace.

The reports says that in 2014, eCommerce was a welcome surprise and was expected to drive industry growth in 2015 too; the General Elections gave a welcome impetus to growth. Telecom players which have been traditionally big spenders in the OOH industry transitioned to smaller towns and cities. Spends by other traditional sectors such as automotive were flat, BSFI stayed away whereas real estate continued to show resilience. Television channels, films FMCG, and education were also seen spending on OOH in 2014.

There have been some common challenges for the industry, such as, lack of clarity on regulations, absence of uniform measurement metrics, issue of unauthorised hoardings and the like.

The last financial year saw a new trend in the Indian outdoor industry i.e. merger and acquisitions, with DentsuAegis Network acquiring Milestone Brandcom. The report predicts that this trend will continue in the current year too since there is a need for consolidation in a largely fragmented industry has been voiced by OOH players for a long time and this high-profile acquisition perhaps gave a taste of what is to come in future years.

Technological advancements and newer avenues for advertising may increase in 2015 and this may prove critical for the OOH sector. The industry would see the requisite technological upgrades to the OOH display units. Since interactivity is the new tool, digital upgrades can add new platforms to the OOH industry. OOH would also see amalgamation of the digital platforms with standard OOH vehicles.

With positive sentiment in the market, the experts expect the OOH industry to grow at a CAGR of 9.8% in the coming years to reach Rs 35.1 billion in 2019. Transit media is likely to grow at a faster pace, but it would continue to constitute a small proportion of the overall media pie. Growth in 2015 is expected to continue - key drivers being eCommerce, auto brands with over 50 launches expected, the 4G roll out, government initiatives and infrastructure growth. Media sector spends are also likely to increase due to sporting events.
Tags : FICCI KPMG
Advertisement