As domestic and international traffic increases at key Tier II airports, a great number of advertising brands are likely to mark their presence in this OOH landscape 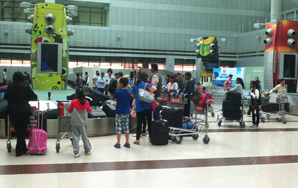 As per recent Airport Authority of India (AAI) statistics, the non-metro airports account about 30 per cent of the total air traffic in India. This is expected to increase to 45 per cent in the next few years. Moreover, some of these Tier II airports also have considerable international traffic, which would be of the essence to advertising brands that seek to connect with this highly mobile consumer segment with relatively high purchasing power. Tier II airports with international terminals, such as, Sri Guru Ram Das Jee International Airport, Amritsar, Calicut International Airport, and Pune Airport are potentially key destinations for advertising brands.

It emerges that some of the advertising brands seen at major metro airports have already taken the route to non-metro airports cities. But the moot point is, are the Tier II airports geared to leverage this trend.

Vinod Kumar N, Regional Head - South, TDI International India, observed that "airports in Tier II and Tier III cities have been showing consistent growth in the last few years and most of the smaller airports like Calicut International Airport have shown an increase in traffic growth by 14% over the previous years.  This has resulted in various brands showing interest in advertising at these terminals.â€

He added that the rate of occupancy at these airports over the last 4-5 years reveal a considerable increase in the number of clients who wish to be present in the airport advertising arena. "Today, you will see brands shops in most of the Tier II and Tier III cities, so it makes sense for these brands to also be present in Tier II and III airports to draw attention to their brand shop in the particular city,â€ he said.

When it comes to North India, the Amritsar international airport is seen as a highly preferred destination for advertising brands. Navneet Dhingra, Director, Orango Solutions, said, "In North India there are only two prominent airports - New Delhi and Amritsar. The Amritsar airport serves more than 30 flights every day. If any campaign is executed at this airport, it will connect with people across the northern region as well as the international community which travels in the 400 km radius of Amritsar.â€

However, unlike Amritsar, Goa which is also a global tourist destination, sees only a seasonal demand. Jatinder Singh, VP-Sales, TDI International India, said: "The Goa airport attract advertisers mainly in the period July to December. Segments like hospitality, breweries, tourism, and media & entertainment show a lot of interest in this airport.â€

International Terminal: Drawing Brands Tier II & III airports with international terminals are the preferred destinations for many advertising brands, the key reasons being: 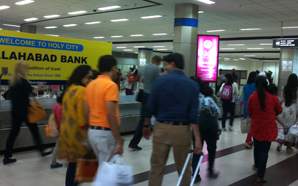 Like metro airports, brands are open to experiment with innovations at Tier II airports to gain uncluttered visibility. The innovations are mainly executed in the immigration area, baggage claim area, and the like where the advertisement sites are strategically placed, ensuring higher visibility.  Also brands utilise outdoor cutouts or o scroller displays to showcase multiple images at the same slot. However, when it comes to new media like digital OOH, media owners themselves are reluctant to develop this medium taking into account its poor performance in metro cities.

"Digital OOH has its own merits and demerits. A key merit is that one space fits all.  Airports being transit media space, clients will prefer static backlit displays, where the impact and the OTS levels are high.  In the case of digital displays, multiple clients share the ad space, and this works as per time slots or seconds.  There are chances of missing the advertisement, as the passenger at the time of his arrival could miss watching a particular ad,â€ explained Vinod Kumar.

Whereas Hodiwala felt that nowadays almost all airports have LCD screens installed at prominent locations. The screens are strategically placed facing the waiting passengers at S.H.A, check-in counters, arrivals, etc.

It is'the more the merrier' for advertisers. However, they also consider various other grounds as well to get the best value for money. Talking specifically about the Calicut airport, Kumar said, "Most of the smaller airports like Calicut have shown an increase in traffic growth by 14% over the previous years.  This is mainly due to increased connectivity and addition of new routes. Clients show interest in advertising in an airport after considering various factors such as their business opportunity, future expansion plans, passenger count at the terminals, destinations served, geographical advantage, etc.  The higher the passenger growth, clients tend to show more interests in a terminal.â€

Adding to this, Singh explained, "Definitely, there is visible increase in domestic and international passenger traffic. The trend of large global organisations setting business in India has further fuelled the rapid growth in airline traffic. Advertising at airports is the most effective way to capture the attention of the key audience for the brand as well as key decision makers. Organised spaces, brimming with the key target audience (youngsters/professionals/businessmen/families), offer ample opportunities for airport advertising. This medium is observed to be highly effective and response generating. It is usually considered for a brand looking for high impact and clutter free advertising.â€

The situation isn't identical for all Tier II cities. Where some airports are flourishing on the advertising revenue front, a few seem to be lagging. One of them is Lucknow's Chaudhary Charan Singh International Airport which has got a mere 2-3 advertisers.

"The biggest issue with Lucknow airport is the travelling audience. The audience is related to SC C class and none of the advertisers is interesting in targeting them.  We have got only two advertisers -- one is from the banking sector and the other is a khadi brand,â€ said Manoj Kumar Saraf, CEO, Third Eye Communications.

Even the international terminal of Lucknow hasn't generated much advertising interest. Saraf added: "Lucknow has direct flights to Dubai but the majority of flyers belong to the lower income segment.â€ He said that privatisation of the Tier II airports will bring about a transformation of the advertising landscape.

On the whole, the current trends at the Tier II airports with international traffic suggest that a greater number of advertising brands will opt for the medium as these airports undergo privatisation and modernization.