The deliberations at the Congress foused upon (i) making a case in the digital world (ii) taking the digital revolution out of home (iii) reclaiming the creative crown (iv) making OOH easy to plan, buy and deliver 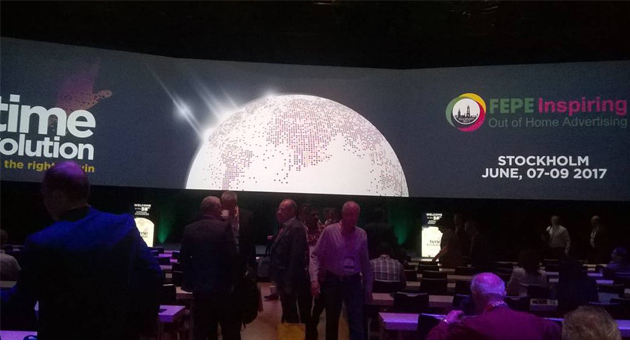 The 58th annual FEPE Congress, being organised at the Radisson Blue Waterfront, Stockholm, directed focused attention on four key areas: (i) making a case in the digital world (ii) taking the digital revolution out of home (iii) reclaiming the creative crown (iv) making OOH easy to plan, buy and deliver. Speaking on the “Four pillars of OOH’s future success’, Matthew Dearden, FEPE President, suggested that OOH must look to “harness mobile as a friend”, look beyond the digital scroller in developing a digital mindset, and leverage the full potential of automation and programmatic buying.

Dearden also said that the OOH audience is growing at a fast rate everywhere in tandem with rapid urbanisation and that the media has not had to “steal” the audience from any other media. He added that outdoor plays a big part in doubling the “chance of fame” for any brand campaign.

William Swayne, Global President, Carat, while addressing on the theme ‘Collaborating to win in a digital economy’ stated that the OOH industry should look to move together with speed to win in the digital world. Citing the key factors that are driving the digital economy, Swayne said that digitalization of the analogue media, explosion of Internet of Things serve as catalysts for the big change. He felt that OOH can be at the heart of IoT.
Barry Louth, Head of Media Planning, Sky TV, observed that the sharp focus on digital OOH in the UK is affecting the core strengths of the classic media. Digital OOH media is more expensive than classic media, whereas classic media delivers significant impact, he said. He urged the industry to preserve the strengths of classic media.

Paul McCormack, Head of Planning, Rapport, also shared his thoughts on how the classic and digital OOH formats need to be harnessed to deliver the best plans for brands.

Noomi Mehta, President, Indian Outdoor Advertising Association and Chairman, Selvel One Group, presented an overview of the big economic changes that are underway in India and the investment opportunities that beckon global OOH firms.

Emeka Okeke, CEO, Media Fuse Dentsu Aegis Network, stated categorically that the world must look at Africa as not one single, homogenous entity but a geographical group of diverse economies, each one of which offers distinct business opportunities.

Later in the day, Nancy Fletcher, CEO, Outdoor Advertising Association of America (OAAA) and Sean Reilly, CEO, Lamar Advertising, make a joint presentation on how OAAA is positioning the medium. Fletcher remarked that collaboration is key to sustained industry growth. She asserted that competition need not come in the way of collaboration. Stating that consolidation of business has helped OOH in many ways, there is ample room for individual enterprises to do business. There are still some 800 outdoor media owning firms operating in the US. She urged the industry to be more “responsive and responsible” in their actions.