Godrej has gone on a major promotional drive for its brand Good Knight's low smoke coil in the rural markets of Maharashtra. 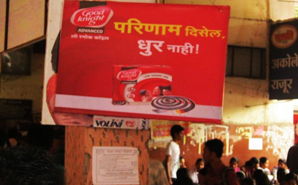 The objective of the new campaign by Godrej for Good Knight was to make people aware of the brand's low smoke coil through a 360 degree communication, branding and engagement at key areas of Rural Maharashtra.  The campaign was done to communicate and demonstrate the effectiveness of low smoke coil to the passersby.

To maximise impact, Vritti Solution projected Canopy activations on the entrance of ST bus stands to catch the floating population and to communicate in a cost effective manner. Along with Canopy, Vritti iMedia Audio Network communicated the message in the local language targeting the mass. The Audio announcement in the ST bus station gave Good Knight a reach of 40,000 people per day; also hoardings were up at the nearby locations to increase the visibility of the brand in ST Bus stands.

The activation was done at 21 districts and small towns of Maharashtra for 7 days at each location. The audio backed campaign helped the brand reach about 2.76 crore people and helped in one to one engagement with around 35,000 people in small towns and rural markets. The campaign obviously gave a spurt to sales of Good Knight low smoke coil by 80% in those regions.