Right Angle Media captures the attention of passersby with eye-catching and natural ambience of the movie on bus shelters in Dubai. 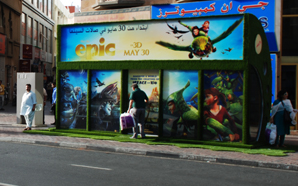 Laqshya Media Group's Dubai subsidiary, Right Angle Media, was recently vested the responsibility for the outdoor duties of Epic, a 3D animated fantasy adventure. The movie closely revolves around nature and looks spectacular with beautiful and lush green landscapes. Epic 3D, which was released in cinemas across the UAE on May 30th 2013, was planned with the perfect outdoor publicity to enthrall movie-goers in Dubai. The beautiful world of EPIC was reflected in their outdoor display at bus shelters, making them alluring and a treat to watch. For this, the agency recreated the attractive and natural ambience from the movie in the bus shelters.

The media format specifically executed for EPIC 3D has brought an innovative breakthrough to the traditional bus media. Multiple bus shelters in Dubai have been wrapped in grass for the premiere of the movie and the impact has just been grand. Locations selected have been apt with the TG movements. Commenting on the success of the OOH campaign, Nikhil Panchamiya, COO, Right Angle Media said, "We are delighted to have another entertainment brand on board, post our success with Yash Raj Film's Aurangzeb. We have been successful in displaying the classic imagery of the EPIC movie on our bus shelters. Our execution blends perfectly with the movie concept. The display looks captivating and thus takes the audience on a drive to the EPIC world.â€