Cyprus Tourism is marking its entry into Indian Tourism industry and for the first time has rolled out the brand campaign on Jet Airways Seatback devices for their promotion. 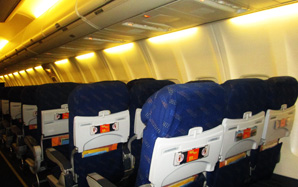 Cyprus Tourism, an international tourism organization has come up with an idea of promoting tourism to Indian travellers. Atin Promotions and Advertising executed the campaign in association with Jet Airways. Renowned for its diverse offering, The Cyprus Tourism Organisation's campaign features the tagline'Cyprus in Your Heart', showcasing the island's diversity - from ancient cities to rural havens, beaches to mountains, gourmet delicacies to holistic retreats - an offering that continues to draw visitors year-on-year.


The Cyprus Tourism Organisation has begun 2013 with the launch of a spring advertising campaign which will be rolled out across the international borders. As a part of their brand campaign, they are associated with Atin Promotions for display on Jet Airways Seatback devices. While executing the campaign many factors have been taken into account by Atin Promotions while opting for a media like Seatback Devices. Seat Back branding is generally highly visible to every passenger in an uncluttered, captive environment. The Seatback devices cannot be missed and instantly capture viewers attention with an average viewing time of 40 minutes to 5 hours depending upon the flight time. It has also been observed that the customers on board are generally in a positive frame of mind and hence they are more receptive to advertising messages. The passengers recall some kind of promotional format displayed in-flight and this is higher among business class and frequent fliers.

In-flight media provides opportunity for a brand to stand out from the pack and generally only a limited number of partners are featured throughout the fleet at any given time. According to the brand, "Advertising activity usually proves very effective in inspiring visitors to book their getaways early, as holidaymakers look for sun-drenched destinations to counterbalance the grey skies and chilly winters. Now, with new and improved campaign, CTO aims to delight the Indian public by effectively conveying messages to a large audience.â€
Tags : Cyprus Tourism Atin Promotions and Advertising
Advertisement