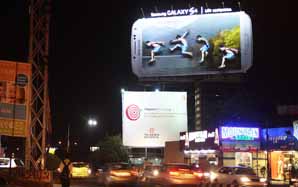 Samsung, premium brand in smartphones category has once again created a high-voltage buzz in the market for their newly launched Galaxy S4. The campaign was designed to create rapid awareness and fresh excitement to stimulate the demand for S4. The idea was to establish premium imagery among the target group SEC A and to create aspirational and niche value for the product. Therefore to achieve this Cheil Worldwide SW Asia, an OOH agency created an out-of-home campaign and selected very iconic and mainly large media formats.

In order to create optimum presence thorugh using iconic media formats, the agency deployed the media at strong visibility touch points like airports, premium malls & main commercial hubs. The campaign was carried out in top 10 towns for the duration of 30 days. The campaign was designed with detailed planning and strategic framework in order to reach to the TG. The right selection of media mix and neat execution was necessary to implement a successful OOH campaign. In order to create strong impact, the agency designed the media specifically to gel with the product imagery. By clubbing multiple adjacent sites, they were able to reach to the desired results. Through this approach, cities like Bangalore saw the largest billboards created ever. The other important touch points were airports in top metros with a special focus on Delhi Airport where the agency was able to completely own the Delhi Airport Terminal 3 departures as a roadblock was created using approximately 80 touch points within the terminal. This distinguishing execution started a trend among advertisers inside the airport and this has become benchmark for many other advertisers. 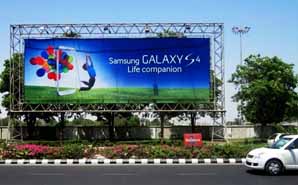 "S4 launch was a key project and we had to stand strong for our client. Challenges were numerous and inevitable. Foremost was how to break the clutter amidst other launches which wanted to eat the same pie and in outdoors it is not just the creative but the medium and location too. Therefore, the second challenge was getting the right site at the right time. But our strength was our forward planning. We were well prepared and made sure that we tapped the right TG and earned his undivided attention. Our presence at airports, especially dominating the T3 terminal impacted our campaign positively. We successfully captured the Gurgaon city which was limed with other competitive brands. Here we created new medium like clock tower and took over faÃ§ades of corporate offices and ensured attention. Clubbing adjacent sites in Bangalore, dominating Delhi airport, capturing Gurgaon corporate offices and simultaneously thinking innovations was a herculean tasks on its own but doing all of them together was almost an impossible achievement. But we succeededâ€, said Hari Krishnan, COO Cheil Worldwide SW Asia. 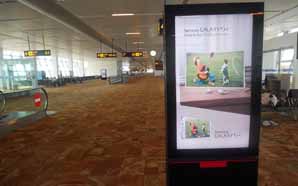 For this campaign, creating a differentiator was also important. Hence one of the features "Drama Shotâ€ in S4 was dramatized in the outdoor environment with much resemblance with the actual feature. The experience of this unique feature was given to the consumer using the media innovatively in select metros. Gurgaon's corporate hub (which is a rich source of business for Galaxy S4) also witnessed new media formats that were created for the campaign. The glass facades of these buildings, which were also selected for the campaign, added on to the overall impact in the tech hub.This was supported by huge backlit phone cut-outs highlighting the product which made the billboard standout.