In a bid to woo the Bangalore market, leading newspaper brand'The Hindu' kicked off a 21-day outdoor campaign in the city on August 15, which celebrates change...read on 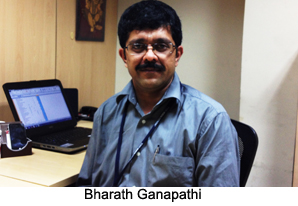 'Change is the only constant'. This adage seems especially apt in this case. After all here is a city that is synonymous with change. And here is a newspaper brand which is synonymous with constancy. The twain seems to have met in this new OOH campaign. Launched to support the brand's readership drive in Bangalore, the campaign's creative duties were handled by Ogilvy while the outdoor has been executed by Mudramax.

"Bringing Bangalore back to youâ€

"People who have lived in Bangalore know how the city has transformed since the early 90s. It has seen an explosive change and has become truly cosmopolitan. The concept behind the campaign is to position The Hindu as a fresh product evolved along with the people of Bangalore, offering them the best of city-based content, and as the only national newspaper covering the changing face of Bangalore,â€ says  Bharath Ganapathi, General Manager - Corporate, The Hindu Group.

The idea was thus to correlate change with Bangalore and convey The Hindu's identification with the readers of a young, changed and vibrant city and the models used for the campaign have been carefully chosen exploring a range of sectors well known in the Bangalore social circle. Adds Bharath, "We realize like every brand, we also need to constantly transform to meet the changing demands of our discerning readership. And hence we had been making those changes to the brand in different southern markets tailored to suit the local readers. These changes are backed by research finding through various readership group interventions.â€ 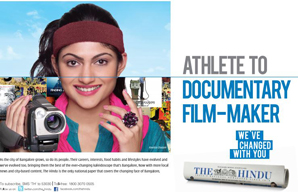 The change story on OOH

Thus, a series of creatives depicting transformation in lives of well known social celebrities was splashed in about 75 billboards across Bangalore.  Lines such as :  From'Singer to Kick-boxer','Teacher to  Stand-up Comedian' ,'Athlete  to Documentary Film maker' etc strike a chord with the city's readers.

Says Bharath in this context, "We are the market leaders in Tamilnadu and Kerala, but Bangalore is a typical media cluttered market - there are 5-6 English dailies and there are Kannada papers. So how do you convince someone to buy your brand? You typically go after readers who want to consume quality news content. In any market in this segment, the number one brand is way ahead. So how do you make a difference and be a credible number 2 is the question. One of the things we realized was that people still liked to read quality news and that is what we are selling today. Even this campaign'Bringing Bangalore back to you' is about that - quality. We are telling the young city of Bangalore that being intelligent is not being unfashionable and nerdy.â€

Well, the response to the campaign on social media has been pretty good already, with requests from people to allow them to put up their own transformation stories on Social media platforms and the brand has already lined up the next big social media campaign based on this. 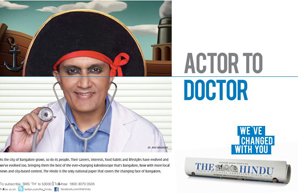 The campaign is another test case of outdoor being one of the best suited mediums especially for a print media brand to connect with its target city and it readership. Having already seen the effects of outdoor campaigns earlier, some of which had more tongue-in-cheek communications recently, the brand is pretty gung-ho on the outdoor medium, spending at least 50% of the total marketing budget on it. Says Bharath, "Outdoor is imminent for a print brand like us and for us it will always be a part of our plan, because there is a lot of crisp messaging that happen with outdoor and it provides a lot of creativity. We correlate out outdoor campaigns and readership drives with call-to-action initiatives (like asking people to SMS on a particular number).  And really, if your media is taking 50% of your budget, you know it's delivering. We also place our outdoors in such a way that there is an audience to it.  We don't randomly put it. Site selection is done scientifically based on the number of footfalls and eyeballs that pass through it. Ogilvy has been our strategic planning partner for the last two years and most of our campaigns involved a lot of research and brain-storming sessions. This is our first assignment with Mudramax though. The idea is to increase the readership base and become a strong media for an advertiser. 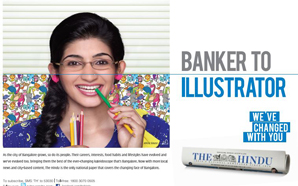 Bharath also revealed that after their last multi media campaign, (again 60% spends were on OOH) the'hits' on their Facebook page rose from 3,000 to 8 lakhs!  The brand, whose circulation has already crossed 150,000 in Bangalore, according to Bharath, is also looking at bus panels and bus shelters branding, besides engaging activations specifically in markets such as Bangalore and Hyderabad where it is actively looking to woo readers.

In the brand's home turf --Chennai and Tamil Nadu at large -- given the outdoor restrictions, the plan is to leverage other OOH media such as movie hall branding, activations again, and of course bus back panels and shelters -- "make do with what we have' so to say, as Bharath puts it. But with more OOH innovation offerings from the OOH industry, there is a lot more that the brand would look at doing in the OOH space there.
Tags : The Hindu Bharath Ganapathi Ogilvy Mudramax
Advertisement