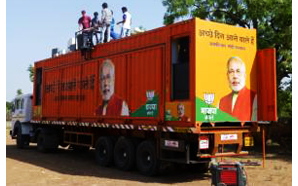 The Lok Sabha election campaign this year unfolded in myriad innovative ways. As a case in point, the BJP utilised the digital medium to maximise its reach with the electorate across the country. The party used close to 200 Christie digital projectors (Christie Roadster HD14K-M and Roadster HD20K-J 3-chip DLPÂ® were used at more than 400 locations nationwide with the plan of having close to 2,000 events). The projectors displayed holographic images of BJP candidate Narendra Modi at election rallies scheduled at various locations simultaneously.

These compact projectors feature HD resolution and a variable contrast ratio of 1600â€“2500:1 for brilliantly crisp, detailed images, equipped with DLPÂ® technology, high-quality optics and 10-bit image processing. The projectors were specifically engineered to produce bright images with detail and depth of color. They were designed with built-in handles, an improved airflow system and multiple rigging points, and they stack up against the rigours and stress of rental/staging during the electoral campaign.

"We're honoured to be part of the excitement during the Indian general elections period where so many of our projectors are deployed at such a grand scale for the first time in India by one of the major political parties for its enormous electoral campaign. The Christie Roadster Series projectors are known for their unparalleled performance and reliability, and we are pleased that they are actively and innovatively used in these massive events that effectively showcase how the power of advanced visual technologies can bring people together to create and share experiences,â€ said Ken Wheatley, Director of Sales, Christie Asia Pacific.

UK-based Musion Das Hologram handled the consulting, designing and managing of these holographic election addresses. The 3D holographic projection was made possible by Musion's advanced hologram technology using its proprietary Eyelinerâ„¢ system. Speeches were filmed and broadcast live via a satellite uplink to the fixed or mobile stages (30-feet by 30-feet) at each day's events. The 3D lifelike holographic-type displays of the politician were projected at each location using a Christie projector mounted high above the stage to stream visuals to the bounce screen, which reflects the image on the stage. The stage held the Eyeliner screen which is made of a unique and patented film that delivers the 3D illusion.

The BJP team was able to view exactly what is being broadcast at any given time, as images are beamed back to the HQ from the various venues and simultaneously displayed on a massive screen from their headquarters. In addition, the vehicles housing the mobile stages, as well as fixed stages were designed and built by Musion. It also trained over 200 installation crews in setting up and using all the equipment deployed at all locations.

"We chose to partner with Christie on Shri Narendra Modi's 2014 election project due to their market-leading levels of performance, service and reliability.  With 200 event teams clocking up tens of thousands of miles throughout the 45-day election, Christie's Roadster HD14K and HD20K projectors are the perfect choice offering excellent performance with the robust reliability needed. The combination of Musion Das Hologram products for holographic systems and Christie's projectors delivers a stunning level of clarity that is amazing millions of people each night of the campaignâ€, said Giovanni Palma, Director, Musion Das Hologram Ltd.

The results have been breathtaking, highly realistic visuals that have since become a hit with supporters in various parts of India throughout the voting period. Spectators at various rallies have described the visual experience as "ecstaticâ€ because the 40-foot by 40-foot by 35-footholographic projections of Modi are so real that it makes them feel he is standing in front of them.