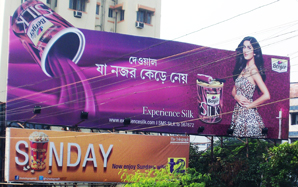 Berger Paints, a leading name in the paint industry, went innovative on OOH this festive season and rolled out a strategic campaign across the country to hit their specific TG. For increasing awareness regarding their brand'Silk', a comprehensive campaign was planned by Berger's creative agency -JWT and executed by their outdoor agency Kinetic. The most important out-of-home options used consisted of large format billboards & the Silk can cut-out which has been put on 28 sites among the total 40 sites taken for the campaign along with other media like hoardings, unipole, gantry or foot over bridges.


Chandranath Banerjee, Product Manager, Berger Paints India Ltd. said talking about it, "Outdoors have been an integral part of Berger's campaigns. This year we decided to innovate with the product can cut-outs, visually depicting the essence of the product. It proved to be successful in improving recall among customers and also drew accolades from trade partners.â€

Amit Sarkar, COO, Kinetic Worldwide said, "The campaign was intended to increase brand awareness and build on the festive mood. Hence it was very important to stand out in clutter and this was successfully executed.â€