Creating a buzz about its new recharge offer, Uninor has rolled out the simplest yet eye-catching outdoor campaign in UP West that instantly connects with target audience of the region. 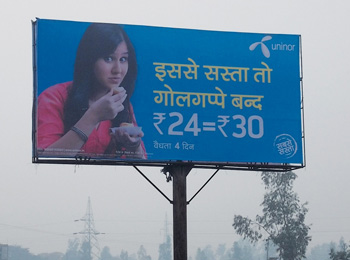 Uninor recently designed this campaign in order to link its'Sabse Sasta' commitment with the common masses. The outdoor campaign was initially conceptualized by Leo Burnett and further cracked by the outdoor partner - Storyboard Brandcom.
Storyboard Brandcom executed the simplest yet the most eye catching proposition possible, through an outdoor campaign that was clutter breaking and high decibel. The out-of-home plan has more than 100 touch points across cities including Agra, Moradabad, Bareilly, Meerut and Dehradun.

Simple branding has been carried out on hoardings and BQS (Bus queue shelters) at the most strategic and high traffic locations in the city with taglines as'Isse sasta to muche saafâ€ - "Isse sasta to golgappe bandâ€. Through this communication Uninor aims to promote a very strong and invariably "sabse sastaâ€ tariff that offers Rs 30 talktime on a recharge of Rs 24 with a validity of 4 days.
Uninor has also installed innovative hoardings with actual moustache at all prime locations in the main towns of UP West, where the character with actual moustache claims to shave it off if a subscriber finds cheaper tariff than Uninor.
"While most other brands in the telecom sector have relied on celebrities to do the talking, Uninor has consciously kept away from the brand ambassadors, letting regular youth take the message across. This current campaign re-emphasizes on Uninor's Sabse Sasta stance and has a direct connect with our local audience in UP West. The innovation we created will surely be able to draw huge audiences at a fraction,â€ says KC Narendran, Circle Business Head, Uninor, UP West.
Adding to this, Ravi Rockey Ambrose, Sr. VP - Integration and New Initiatives, Storyboard Brandcom says, "The team came up with the strategy of cluster bombing and thus creating impact in the market and enhancing the visibility tenfold within the budget. To enhance the creative impact though the moustache innovation. We believe we have made Uninor the most visible brand in UP West region. We have received great response and recall for the campaign, and has led to positive impact on the sales.â€
Tags : Uninor Leo Burnet Storyboard Brandcom Ravi Rockey Ambrose
Advertisement