RelianceTelecom is back in action in the OOH space to promote its new 3G proposition among its TG across different markets. 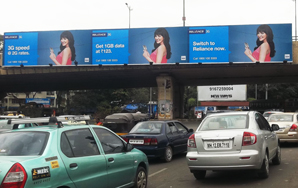 A succinct and simple messagewith a dash of colour and a popular celebrity to boot, this is exactly what Reliance Communications has done to promote its 3G service on OOH. With the catchline "Reliance 3G speed @ 2G ratesâ€,a vibrant hoarding with a blue base colour and the image of Anuska Sharma as brand ambassador, the company's new campaign has been kicked off across thirteen circles at major cities including Mumbai where it is seen at Sion flyover, Vile Parle (near airport)and Worli AB road. In Delhi, the campaign is strategically placed at the International airport and the NCR region, including Noida and Gurgaon, and in Kolkata at Gariahat road and PG Harish Mukherjee Road. In all, the campaign was seen at 485 properties across 338 locations including smaller town classes. 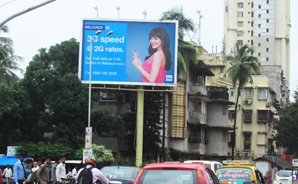 It has been strategically placed at various locationswhere the footfall is maximum, to create impact and a buzz among the target group. The campaign began on July 26, 2013 and was up for a month. Additionally, there is a separate high Impact outdoor plan running for Mumbai currently.

With a short and crisp messaging, the campaign manages to drive brand recall that easily gets registered in the mind of the target group, even without any of the out-of-box innovation in terms of formats.The campaign, has also seen Reliance coming into the outdoor space after a long time.

initiative that will break all barriers and create data democracy with the Launch of 3G speed @ 2G rates.  All data customers will now be able to enjoy the benefits of 3G data services by simply paying the price of 2G. As always Reliance is again in the limelight of innovation.

The objective was to reach the target group by creating an impact with the new propositions offered by Reliance. Together with other media presence the OOH plan was necessary to sustain the punch in order to hold the attention of the target group even when they are on move.We identified high impact sites throughout cities and went out with a simple message - 3G speed @ 2G rates. And it delivered huge eyeballs and impact which were evident from the lacks of calls received at our call centers as well as the early 3G adoption rates which broke all records. I congratulate team Kinetic Worldwide on

their successful planning and execution of this campaignâ€

Kinetic Worldwide played a key role in the campaign not only in site selection, but also in the visibility and execution,being connected with all stakeholders from the local market, and keeping them in the loop.

Says Amit Sarkar,Chief Operating Officer, Kinetic Worldwide, "OOH was one of the key drivers of this campaign. Only impactful large formats were used at key locations in every market where the campaign was executed "

T Gangadhar - Managing Director- MEC,further shares his take giving  a thumbs-up to the  campaign, "The Reliance Mobile 3G @ 2G rates has been one of the most visible out of home campaigns in recent memory. A path breaking message like this needed a high-impact outdoor presence and that is exactly