Men in Black 3 premieres at OOH

With the right blend of impact and frequency, Media Circle creates an eye-catching OOH campaign for the blockbuster movie Men in Black 3, premiering on Sony Pix. 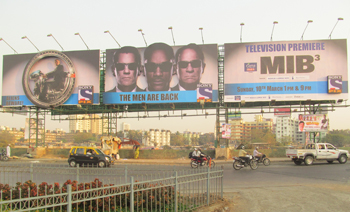 Media Circle was briefed to plan an OOH campaign which was a combination of large size formats and frequency, since the movie being aired was a blockbuster and was premiering on television for the first time. For an additional impact Sony Pix also wanted innovation to be embedded in the campaign at high traffic junctions. Media Circle brainstormed and came up an idea to deploy three different creatives at one place, which was enhanced with the adding movement. Speaking about the campaign Himmat Butalia, Marketing Head, Sony PIX says, "The idea of using outdoor should not be effervescent, it should stick around long enough to generate genuine inquisitiveness, clutter breaking and high recall amongst the consumers. Having a regular single dimension hoarding out on the road just does not cut it anymore. Marketing media cannot work in isolation, and outdoor is something that needs to fit into the grander scheme of things.â€

The three main characters of the movie were constructed in 3D effect and lit alternatively so as to grab the attention of the passer-bys and an added hoarding which had circular visuals was installed, wherein the lights rotated continuously, thus adding dynamism to the creative.

"Apart from creating high visibility for the campaign across metros, the challenge was to weave innovation by adding movement and all this had to be accomplished within a tight deadline. We the Media Circle team and the production team Atharava Enterprise worked diligently and made it happen,â€ says Anil Vora, MD, Media Circle.
Tags : Media Circle Sony Pix
Advertisement