Lenovo in association with Kinetic Worldwide agency has promoted its new smart phone Vibe X through the OOH medium. The campaign has been specially designed for Bangalore city, targeting SEC - A, A+ audience in the age group of 16-30 years.

Lenovo has launched a new smart phone called Vibe X, which the company claims, is the lightest smart phone in the market. The smart phone is slim, made up of featherweight frame with premium design. The cell phone's measurement is just 6.9mm, as thin as a pencil, and at 121 grams (0.26 lbs), it weighs less than other smart phones its size. Considering this, the brand has developed an entire OOH campaign with the aim of highlighting this quality of the smart phone. The campaign is called "I. Me. My Vibeâ€, showcasing various creative's talking about the features of the phone. The objective of the campaign was to promote Lenovo Vibe X among the target audience of SEC - A, A+, 16-30 years and is majorly seen in Bangalore city for a duration of 21 days. The outdoor campaign duty has been handled by Kinetic Worldwide, India.

The objective of utilising the OOH medium was to fuel greater customer engagement and create buzz around the Lenovo Vibe X, a smart phone with an edge. Lenovo Vibe X is all about the aura, mood (good) vibrations, feel and rhythm. Thus, the campaign is youthful, bold and colorful with a strong focus on'it's my life beliefs and values' in keeping with the TG.

"For the launch activity of Lenovo Vibe X smart phone, the client decided to use OOH as a major medium. High impact, large format billboards, Mall Facades and Sky-walks in key locations were used across the market to reach out to the TG on the go. To enhance the visual impact of the creative, high-resolution UV prints were used on select billboards. With inputs from us, a change in creative was initiated by the client in the second phase which further enhanced the visibility and the recall of the campaign. The simple, yet effective innovation of a larger than life 3D image of Lenovo Vibe X smart phone floating atop a billboard, conceptualised in-house, helped bringing home the USP of the phone being the lightest in its category. The entire activity was phased strategically in a manner that ensured the overall visibility of the campaign running much beyond the committed duration of the campaign", said Ranadeb Paul, AVP Kinetic Advertising India Pvt Ltd. 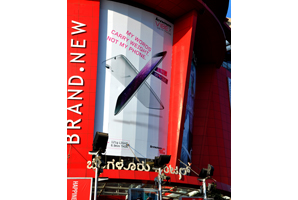 The campaign creative showcases the elegant smart phones with an interesting copy saying'My words carry weight, not my phone' along with the tagline:'I. Me. My Vibe'. As part of the campaign innovation, a "floating effectâ€ has been created on the billboard. The tactical creative adaptation was done in consultation with the client. To make the phone levitate and semi-detached from the board, ample shadow effect was created at the bottom of the phone with the top right portion jutting out. The printing was done in UV high-resolution mode to add 3-D effect to it.  A flawless execution of the cut-out helped the agency in generating the desired result.

All in all it is a high-decibel campaign that has been developed to make the brand and product visible all over the city. Important and maximum footfalls locations have been taken for the campaign including key arterial roads which are the lifeline of the city, besides popular malls, the International airport, corporate hubs, major junctions and major residential apartments and enclaves, IT parks, major flyovers that connect the city across and the CBD areas in the city. Mainly large formats have been taken such as malls mediums, billboard/unipole and gantry thus creating high visibility and exposure to the brand. 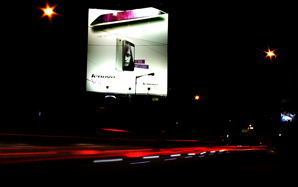 Anuj Sharma, Marketing Head - Smartphones, Lenovo India said speaking about the brand and the campaign, "The objective was to tap into the attitude of the consumer. The Lenovo Vibe X is about expressing personal experiences and hence an extension of one's own expressions. We targeted interesting out-of-home touch points, which generated the desired visibility of our audience. Kinetic India has executed the campaign very well in Bangalore which is one of our key markets. The OOH campaign made sure the customer came closer to the brand Lenovo Vibe X. The overall outcome of the campaign is satisfactory.â€
Tags : Lenovo Kinetic Worldwide Anuj Sharma Ranadeb Paul Veidehi Gite
Advertisement