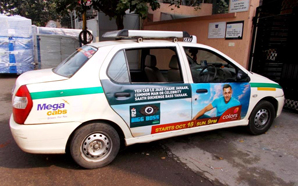 CASHurDRIVE has been roped in as the Official Transit Partner for the popular show Bigg Boss Season 10. The OOH campaign of Viacom 18 was intended to project the latest show’s concept through eye catching airport taxi advertising in Delhi and Mumbai.

The promotional plan was further clubbed with road shows and a selfie contest to gain maximum visibility. One road show on a daily basis was scheduled covering major locations of both the cities a week prior to the premiere episode launch. Simultaneously, the selfie contest on twitter reinforced maximum participation on social media.

The highlight of the transit media artwork was the tagline: “Ye Cab Le Jaoo Chahe Jahaan, Common Man Or Celebrity Saath Dikhenge Bass Yahaan” along with the programme details and an image of Bollywood superstar Salman Khan flashing on both the doors and bootspace. The actor is hosting the show for the eighth time and has become the perpetual identity of the show. 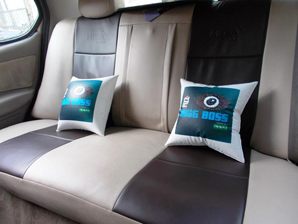 The bootspace back even carries CASHurDRIVE logo titled as Transit Partner. Apart from exterior advertising, Bigg Boss branded pillows were placed inside the taxis. The idea was inspired by the current show format i.e. to build comfort zone for common people or travellers.

Commenting on the activity Nitesh Nagpal, VP Sales & Marketing, CASHurDRIVE, said, “Bigg Boss is amongst the most popular and interesting reality shows in India. Unlike the previous seasons, Season 10 holds a twist in the tail. For the first time, the show is featuring common people and celebrity contestants on the same platform. We have tried to incorporate the new-fangled show concept to the promotional plan. Even the placement of branded pillows is to reconstruct the exciting idea and to give the campaign an innovative approach along with the bang on visibility.”