With a technology-enabled monitoring mechanism, media owners would be able to store and retrieve real-time data on any media unit where the campaign is deployed. Currently, this technology is being applied on billboards. 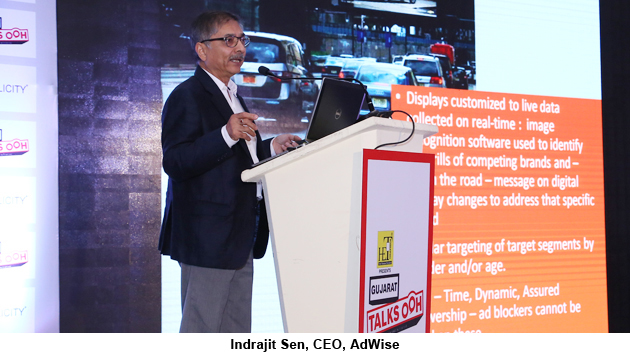 Even as new technologies transform the advertising industry, in the OOH space certain long-standing issues still remain largely unaddressed, such as, proper execution of campaigns, consistent lighting of media, state of the media unit, etc. That is, media monitoring continues to be a niggling issue with OOH advertisers, agencies and media owners. Indrajit Sen, CEO, AdWise, talked about how adoption of Internet and GPS-enabled media monitoring systems could address the long-standing issues at one go. He spoke at length on this topic in his address on the theme ‘How can technology help OOH to do business better’ at the recently concluded Gujarat Talks OOH Conference that was held in Ahmedabad on December 16.

Media owners are having to deal with random deductions on payments every now and then whenever advertisers cite that their campaign was not seamlessly executed. With a technology-enabled monitoring mechanism, media owners would be able to store and retrieve real-time data on any media unit where the campaign is deployed. Currently, this technology is being applied on billboards.

Sen explained that It was mainly because of lack of data on media monitoring that POs are being released to media owners much after a campaign is executed. He added that all media buying is now subject to intense scrutiny and service level norms are getting stricter by the day. So, the importance of media monitoring can hardly be overstated.

For want of data “everyone seems to sacrificing quality,” he said. “We need to create transparency in all our dealing.” This can be tackled by using Internet and GPS-based technology with which each site can be identified and monitored continuously.