Home » OOH News » Media will not get a poll boost, says KPMG

Media will not get a poll boost, says KPMG 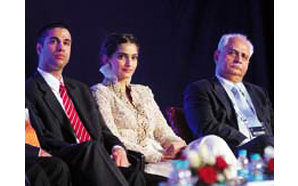 Despite the coming elections, the 2014 growth forecast for the media and entertainment (M&E) sector continues to be conservative at 13 per cent, according to KPMG.

While the elections are expected to give the April-June quarter a spurt, in terms of spends, the ensuing quarters will see a pullback, as the macro economic conditions continue to be slow,â€ said Jehil Thakkar, head of media and entertainment, KPMG in India.

According to the Ficci-KPMG M&E sector report, released at the 15th Ficci Frames here on Wednesday, the media and entertainment segment saw 26 transactions in 2013 versus 35 in 2012. Deal values, too, were comparatively lower. "We will only see deals increasing and activity picking up once there is clarity on the regulatory and economic fronts. Consolidation, as well as inbound deals, are likely to pick up once there is more certainty on both fronts,â€ said Thakkar.

The KPMG report says the tax structure and regulatory environment added to the challenges. The sector was burdened with the varied streams of direct and indirect taxes â€” entertainment tax, service tax, VAT, income tax, to name a few. The Telecom Regulatory Authority of India had recommended a revision of foreign direct investment limits in certain segments. Approval to this could boost investment, the report added.

On the first day of the three-day event, leaders from various segments put across their views and concerns. Punit Goenka, chief executive and managing director of Zee Entertainment, said the sector employed a significant workforce, of six million, and hence was crucial for social and economic development of the nation.

Uday Shankar, Ficci Frames chairman and STAR India chief executive, said while the growth was encouraging when compared with the growth of the economy, many gaps existed. "While delivering a growth rate three times that of the country at large is a cause for satisfaction, the truth is that in dollar terms, we have barely made a dent this year. And, even more important we remain at a great distance from the goal of growing the sector to $100 billion,â€ said the former journalist.

Mergers and acquisitions would be rampant, said Bimal Julka, secretary, information and broadcasting ministry, given that there were approximately 800 channels in the country and around 245 pending channel licences.

Julka said self-regulation was the best form of regulation for content, ad regulation and TV viewing measurement. He urged the Broadcast Audience Research Council to ensure the issue over ratings was cleared, given that TRPs or target rating points were critical for the broadcasting sector. Talking about the positives of digitisation, Julka said, "We have seen that the entertainment tax collections from the territories where digitisation has been successfully implemented have increased two to three times.â€

Broadcasters, however, said a lot was yet to be done in digitisation. Sudhanshu Vats, Group CEO, Viacom 18, said, "We have succeeded in digitising TV viewing homes but I would like to know when addressability comes into practice. Until we achieve that, the process is not complete.â€ The regulator should discontinue the practice of charging carriage fees, he added.

Ficci had sent a list of suggestions to the government for growth of the sector. Harshvardhan Neotia, vice-president, Ficci, said, "We have suggested to the government four key issues, namely, expediting the roll-out of digitization, implementation of Goods and Services Tax, fighting piracy and launching a children's channel with the national broadcaster.â€